Sunrisers Hyderabad (SRH) will look to bounce back as they take on the in-form Chennai Super Kings (CSK) in Match 20 of VIVO IPL 2018 at Rajiv Gandhi International Stadium on Sunday. SRH were struck by Gayle storm at Mohali in the clash against Kings XI Punjab (KXIP). Meanwhile, CSK rode on Shane Watson s century to claim 64-run win over Rajasthan Royals (RR).

Apart from being hit by Gayle, SRH also suffered a setback as Shikhar Dhawan injured his wrist. Considering there are no updates yet on Dhawan missing out the tie, CSK have to be wary of SRH s top-order. SRH have come good with their bat this season. Right from Wriddhiman Saha to Dhawan to skipper Kane Williamson to Deepak Hooda to Shakib Al Hasan, all have proved their worth with their cameos in every game. Williamson will hope their batting to do the talking at their den against CSK.

However, it is SRH s bowling that needs attention. Calling in Chris Jordan for Billy Stanlake was not the right decision after all. All their bowlers were taken at cleaners by KXIP batsmen. Jordan ended with figures of 4-0-31-0 while the Afghan sensation Rashid Khan went for as many as 55 runs despite taking a wicket. Bhuvneshwar Kumar was the only economical bowler amongst the lot. SRH s bowling unit that is considered to be the most balanced one in this season of IPL, need to keep that tag intact and prove their worth against a well-balanced side like CSK.

CSK s batting has been on top as well. After winning two games, CSK also suffered a setback against KXIP. Nevertheless, they were back in form against RR. Watson who was trolled during the 2018 auctions, proved age is indeed just a number. Apart from Watson, Ambati Rayudu and MS Dhoni are handling the finisher s task well. Suresh Raina who returned from a calf injury also responded well with his 29-ball 46 vs RR. Faf du Plessis is another option CSK can try at the top if they push Rayudu to the middle.

Both the teams are have six points each from four matches. If given a closer look, SRH and CSK have had same results with the same teams they have played so far. KXIP enjoyed the last laugh against both the sides. As for head-to-head record, CSK are at an advantageous spot with 4:2. At this venue, it is 1:1.

Interesting clash alert: Raina has been Bhuvneshwar s bunny in IPL, thrice to be precise. Meanwhile, Dhoni has enjoyed a great run against Bhuvneshwar. He has scored 81 runs off him from just 44 balls at a SR of 184.09. Who will end up entertaining the Hyderabad crowd on Sunday afternoon? 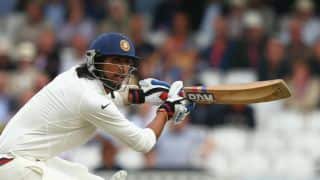