It was in the match 14 between RCB and MI that Virat Kohli had gone past him with his unbeaten knock of 92.

In the match 20 of Vivo IPL 2018 between Chennai Super Kings (CSK) and Sunrisers Hyderabad (SRH), Suresh Raina (4658) regained the top spot in the list of most runs scorer in IPL. It was in the match 14 between Royal Challengers Bangalore (RCB) and Mumbai Indians (MI) that Virat Kohli had gone past him with his unbeaten knock of 92. However, Raina has claimed that spot back scoring 54 off 43. He is now 9 runs ahead of Kohli (4649)

CSK got off to a slow start scoring only 27 runs in the Powerplay. Raina came to bat after the wicket of Shane Watson in the fourth over. He was finding it difficult to get the ball away in the start. It was in the 12th over when he smashed Rashid Khan for two consecutive sixes to get momentum going. Ambati Rayudu played a brilliant knock of 79 off 37 balls to lift CSK up. It was Raina and MS Dhoni who took on from there and guided CSK to 182 in the first innings. 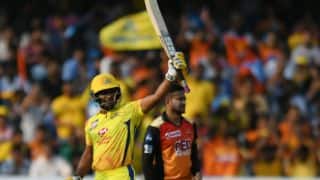