Kieron Pollard was happy to find all his West Indian teammates coming good in IPL 2018.

Chris Gayle went unsold in VIVO IPL 2018 auctions twice. It was in the third round that he was picked by Kings XI Punjab (KXIP). Let’s rewind to BPL 2017-18. He had registered the highest individual score in BPL history during the playoffs of the tournament. Gayle scored an unbeaten 126 for Rangpur Riders, during their Eliminator tie against Khulna Titans. He scored similar runs in the final of the tournament as well.

Let’s not forget, Gayle is the only cricketer to amass 10,000 runs in this format. There is no record Gayle has not achieved in his T20 career. He once again announced himself, this time in the IPL stage, by powering 22-ball 50 on his debut for his new team KXIP. He was left out by Royal Challengers Bangalore (RCB) during the auctions.

Apart from Gayle’s KXIP teammates, his fellow West Indian was also pleased to find Gayle back with runs. Kieron Pollard expressed his happiness during the pre-match press conference in Mumbai on Monday: “When you talk about Chris Gayle, you talk about the guy with most T20 runs, the best record, the most sixes, the most dominant force in T20 cricket. As a fellow West Indian, it is disappointing that he didn t fetch a buyer in the first or second round. But he eventually got a buyer. And in his first game in the tournament, it was pleasing to see do what he can do,” as quoted by The Hindustan Times.

In fact, Pollard is happy to see all his West Indies teammates coming good in 2018 IPL: “It seems like he has to prove himself once again. And Universe Boss does in fine style, he did it well. And as a fellow West Indian, it is pleasing to see him come out and score runs, it is pleasing for me to see (Andre) Russell, (Dwayne) Bravo and all the guys doing well. Every day, you re happy to see these guys performing, and when it is your day, they will be happy in return for you as well.”

Evin Lewis did struggle to make his stance clear in IPL, but he came good in the next two games giving the required boost with Suryakumar Yadav in the top-order. Pollard wants Lewis to remain consistent at the top: “The only difference is that IPL being a T20 tournament, the biggest T20 tournament in the world, the expectations are high. He has seen a lot of it on television, It is a matter of him soaking in the atmosphere, and as we can see, he has got into the groove, a couple of scores under his belt, hoping as a team that he can bat and bat a bit longer and get a big score for not only himself but also for the team.” 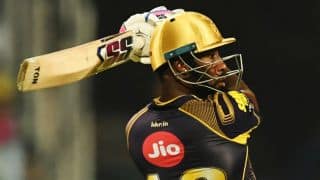 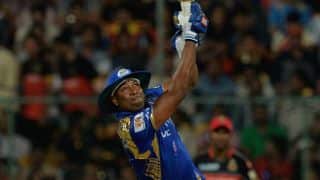