Rohit Sharma started his IPL journey with the Hyderabad-based Deccan Chargers in 2008.

Rohit Sharma’s mother hails from Visakhapatnam, a coastal town in Andhra Pradesh. Rohit’s association with the state has been long term. In fact, Rohit started his IPL journey with the Hyderabad-based (then the capital of Andhra Pradesh) Deccan Chargers (DC). Only 20 then, Rohit went on to set alight the first edition with 404 runs for DC at 36.72 and a strike rate of 148. He went on to win the Emerging Player award with them and also bagged his hat-trick.

In 2009, Rohit won his first IPL title with DC. In the three seasons he played for them, he piled up over 1,100 runs. He went on to have many happy memories at the Rajiv Gandhi International Stadium in Uppal, Hyderabad.

Now, as the skipper of Mumbai Indians (MI), Rohit returns to his happy hunting venue for an away match against Sunrisers Hyderabad (SRH). In the 13 IPL matches that he has played at this venue, Rohit has amassed 429 runs averaging 47.66 at a strike rate of 144.44.

Rohit calls Hyderabad one of his favourite cities and it is at this venue where Rohit led MI to their third title, in 2017.

.@ImRo45‘s special connection, couple of players with inside access and fond memories from this ground

Watch out Orange Army, our boys are here to paint the town blue and gold. #SRHvMI #CricketMeriJaan pic.twitter.com/BiTE4etLPF

MI face SRH in the Match 7 of VIVO IPL 2018 at Hyderabad on Thursday. Co-incidentally, Mumbai played Hyderabad at the same venue on April 12, 2017. Mumbai won the contents. Head-to-head, both teams have won five games apiece against each other, however, at Hyderabad, SRH have a 3-2 edge. MI have Ben Cutting in their camp, the man who helped SRH win the 2016 IPL final. 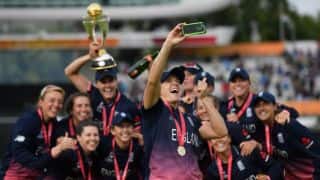