December to January saw McCullum completing BBL. He later went to Dubai for PSL. He then came to India for IPL and will soon after leave for England in order to play NatWest T20 blast which will be held until September. Then there is CPL in the pipeline.

Out of these T20 leagues, McCullum leads Lahore Qalandars in PSL and Brisbane Heat in BBL. Apart from a famed side, RCB does possess plenty of leadership skills. RCB is not just dependent on Virat Kohli, but McCullum and AB de Villiers are also present in the side who can bring in their captaincy values to the table.

In a conversation with cricbuzz, McCullum reveals what captaincy tips he shares with Kohli, his learning s from T20 leagues and his love for RCB:

Brendon McCullum, Virat Kohli power RCB: The first thing I did was I spoke to him when I arrived. I said I’ll throw a whole lot of ideas at you. You don’t feel like you’ve to use any of them. But I hope he feels confident that he knows that myself and AB and Quinton as well, who is a very astute thinker of the game, we’ll give him ideas and his prerogative is to be able to use the ones he wants to and make the decisions. It’s a tough job, to make the final decision. But I think it’ll work well.

In fact, Kohli has been open to some ideas shared by the ex Kiwi skipper.

Apart from blasting his way as an opener in the T20 leagues, McCullum also enjoys the different cultures and environment every country he visits: (It) gives you the opportunity to go and experience different cultures, different environments. I’d like to think of myself as quite a social and easy to get to know person. So you start to open up some great friendships from around the world with different guys you’ve played with, which I think is pretty special.

On playing for RCB: RCB are very calm, very muted and very determined to try and achieve success. They also treat you fantastically well as a person and offer an opportunity for you to go out there and express yourself. 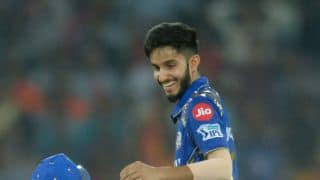