Ambati Rayudu and MS Dhoni added 101 off just 53 balls for the 5th wicket for CSK to help them beat RCB.

Virat Kohli and MS Dhoni share a wonderful camaraderie. Dhoni retired from Tests in December 2014 and handed the reins to Kohli. Two years on, he quit limited-overs captaincy and Kohli became Team India’s captain across formats. When under fire, Kohli has been vocal in his support for Dhoni and time and again, he has looked up to suggestion from the former skipper. But IPL is a different kettle of fish. Over the years, Kohli and Dhoni have enjoyed rivalry in franchise colours with the latter toppling the former most of the times. Wednesday night was no different. Dhoni’s 34-ball 70* took Chennai Super Kings (CSK) to the top spot in the VIVO IPL 2018, whereas Kohli’s Royal Challengers Bangalore (RCB) succumbed to their fourth loss this season.

Dhoni joined Ambati Rayudu when CSK were reeling at 74 for 4 after 9 overs in their bid for 206. Rayudu and Dhoni added 101 off just 53 balls to see them home. Rayudu top scored with 53-ball 82. Despite the defeat Kohli went on to hail both the batsmen. In the post match interview with Michael Clarke, the Australian asked him to comment on ‘young’ Rayudu being another prospect for the national side.

Dhoni is looking in really good touch, he’s hitting the ball really well this IPL but not great to see it against us – Virat Kohli pic.twitter.com/LV1uPZURMq

Kohli smiled, “He is not young, has been around 15 years, been around forever (smiles). Quality player and we all know that. Has done well in the IPL and domestic, also has done well for India too. You never know who gets the opportunities (for India). He deserves the applause. I am happy for him.”

Dhoni has not been at his consistent best for India colours. He has moved up and down in the order. Kohli was delighted with Dhoni’s success and lamented the fact that the CSK skipper’s best came against RCB.

“Great to see him strike a few, not against us though. We wouldn’t have liked that. He’s hitting the ball really well this IPL. He is in a happy space, batting higher up and expressing himself. Seems to be enjoying it. Credit to him as well,” Kohli added.

RCB were asked to bat first at M Chinnaswamy Stadium and they were powered to 205 for 8, courtesy AB de Villiers’ 30-ball 68. He was well supported by Quinton de Kock, who scored 53 off 37 balls and later Mandeep Singh blazed away with a 17-ball 32. 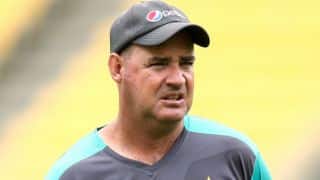