It has been two days since the best VIVO IPL 2018 match between Chennai Super Kings (CSK) and Royal Challengers Bangalore (RCB), but MS Dhoni‘s masterclass innings has not fizzed out. Dhoni’s overshadowed AB de Villiers show with his unbeaten knock of 70. Dhoni smashed the ball to the stands as many as seven times that included the winning six as CSK chased down RCB’s 205.

That innings left every person talking. West Indies’ Viv Richards was left awestruck by Dhoni’s innings, once again. Dhoni played a similar innings as that of ICC World Cup 2011. While writing his column in The Times of India (TOI), Richards expressed Dhoni’s innings through words: “Dhoni was back to his best with the bat again, carrying the entire hope of his team and the fans on his shoulder in the final overs of the game. He and Ambati (Rayudu) played brilliantly to set the tone for the chase. The Chennai skipper, unlike his Mohali entry, started instantly in Bangalore, which was a sign that he is still the player to watch out for, despite the criticisms he has recently received.”

He further wrote: “The man, as always, kept his cool to push his team over the line in a thrilling game which always has been the case when these two sides have met in the past.”

A total of 400-plus runs was played at Chinnaswamy that included 33 sixes. Richards mentions that he enjoyed a great game of cricket: “What a brilliant game of cricket we had at Bangalore on Wednesday. Interestingly, the home team pulled the momentum to their side even further dismissing Chennai s explosive top order batting within nine overs into the second innings. Yuzvendra Chahal and Umesh Yadav were accurate enough to cut down the run-flow and pick wickets simultaneously making it even harder for the chasing team to catch up with the required rate. But credit to Chennai for not succumbing to the pressure and holding the nerves.”

That game took CSK back to the top of the points table while Virat Kohli had to face the flack for his poor captaincy skills from ardent RCB fans. 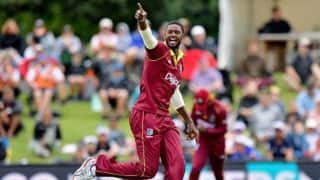