Kolkata Knight Riders (KKR) is a happy camp. They play tough on the greens and the players share excellent camaraderie off the field. They ensure that KKR s social media handle is kept busy. During a Nokia ad shoot, the players got in a lighter mood and had a gala time pulling each other s leg. All-rounder Andre Russell is known to be a prankster and he is seen imitating skipper Dinesh Karthik s walk back to the pavilion and also Robin Uthappa s batting style.

Knights are always focused in the middle, but off the pitch they re always upto some fun!

Here’s some Behind the Scenes footage from the Nokia TVC shoot!

Earlier, KKR posted a video where we get to see a playful Karthik saying the team slogan, KKR hai tayyar in different moods.

KKR have played 6 matches in VIVO IPL 2018 and won 3 of them. They lost to Kings XI Punjab (KXIP) at Eden Gardens on Saturday in a rain-affected encounters. KKR, 2-time IPL champions, are third in the points table. 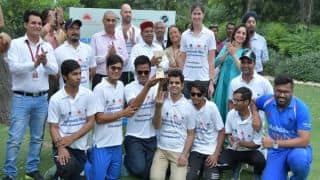