Dwayne Bravo played a similar kind of innings in the opening match of IPL 2018 against Mumbai Indians (MI) when he smashed 68 off 30 to win it for the team.

Chennai Super Kings (CSK) pulled off another stunning win at Wankhede Stadium, Mumbai, this time against Sunrisers Hyderabad in the Qualifier 1 of Vivo IPL 2018. CSK were reduced to 92 for 7 chasing 140 with Faf du Plessis holding one end up. In the end du Plessis took CSK home with an unbeaten 67 in 42 balls. Dwayne Bravo had played a similar innings in the opening match of IPL 2018, against Mumbai Indians (MI), when he smashed 68 in 30 balls to win it for the team. Bravo, one of the most entertaining players on and off field, was seen practising his dance moves along with Harbhajan Singh in the dressing room after CSK confirmed their spot in the final.

CSK as a team have qualified 9 times in IPL Playoffs in 11 attempts. They have made it to the final in 7 of these. SRH will now face the winner from Eliminator 1 match between Kolkata Knight Riders (KKR) and Rajasthan Royals (RR). The final is scheduled to be played on May 27 at Wankhede Stadium, Mumbai. 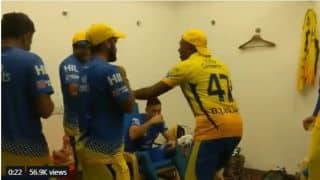