In IPL 2018, so far, Kolkata Knight Riders have won and lost one encounter each.

Kolkata Knight Riders‘ (KKR) won many hearts with their theme song “korbo lorbo jeetbo re” ahead of IPL’s inaugural edition in 2008. Prior to VIVO IPL 2018, the Shahrukh Khan-owned franchise came with a new anthem for the new-look side being led by Dinesh Karthik. While the song has caught hold of the fans and viewers’ attention, KKR’s official twitter handle revealed the behind-the-scenes for the anthem, “KKR hai taiyar.”

Here s some behind the scenes snippets on how KKR got Taiyaar #KKRHaiTaiyaar #IPL2018 pic.twitter.com/EUp11wG69d

The video starts with few of the support staffs prepping up for their stint ahead of the camera. The cheerleaders are also seen sweating it out in the clippings before Shahrukh joins the video with the background playing “KKR hai taiyar.”

Leave us your comment below to mention which song did you enjoy the most. Is it still the vintage “korbo lorbo jeetbo re” or it has been pushed aside with this energetic “KKR hai taiyar.”

KKR opened their campaign against Virat Kohli-led Royal Challengers Bangalore (RCB) at home on Sunday. They won the match by 5 wickets, but lost their first away game versus Chennai Super Kings (CSK) despite being on top on most occasions. They next play versus Sunrisers Hyderabad, the current table-toppers, at Eden Gardens, Kolkata on Saturday. 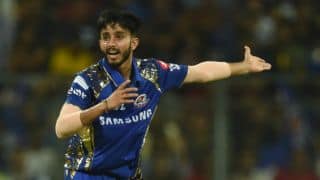