Evin Lewis scored his maiden IPL fifty with his knock of 42-ball 65.

West Indies players have proved their point time and again in VIVO IPL 2018. Andre Russell scored a blistering 36-ball 88 for Kolkata Knight Riders (KKR) against Chennai Super Kings (CSK). Evin Lewis proved his stance against Delhi Daredevils (DD) scoring 28-ball 48. Chris Gayle made a strong statement scoring 22-ball 50 in his first game for Kings XI Punjab (KXIP) after being snubbed in the auctions twice. On Tuesday, Lewis was back amongst runs and brought up his first fifty in IPL. He scored a 42-ball 65 and also added partnership of 108 runs with skipper Rohit Sharma.

Ahead of the Mumbai Indians (MI) vs Royal Challengers Bangalore (RCB) game, Kieron Pollard had mentioned how delighted he was to see the success West Indies players are achieving in 2018 IPL. Rohit, almost echoed the same thoughts during the post-match press conference. Rohit said West Indies players should be allowed to do their thing.

Apart from Lewis’ brilliance, Rohit himself announced himself in a must-win clash by putting up a elegant show for Wankhede Stadium with his 94 runs. That propelled MI to score of 213. Rohit, however, clarified that there were no plans in place for RCB bowlers: “When you are batting you have to put pressure on the bowlers whether it is spinners or fast bowlers you should, the time you allow them to bowl the day they want to bowl, that is when you will put yourself under pressure,” as quoted on The Hindustan Times.

“We never had any discussion about which bowler to target, like I said we had left-right combination going all the way through, when off spinners are bowling, right-handers are most likely to take that chances and when leg spinners are bowling left-handers will take most of the chances, that happens everywhere with all the team, that is the planning,” he added. 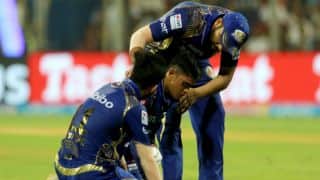 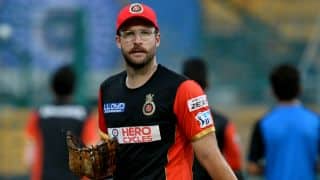