Aaron Finch has bagged 2 consecutive ducks in his 2 outings in IPL 2018.

It all started on a happy note. Aaron Finch is being considered as a possible candidate to take over as Australian limited-overs captain. He got married to long time girlfriend Amy Griffiths earlier this month and came to India to represent Kings XI Punjab (KXIP) in the VIVO IPL 2018. All he managed is golden ducks on consecutive occasions. However, that is not his only embarrassment. When Finch took the field for KXIP, against Royal Challengers Bangalore (RCB) last week, he became the only cricket to have represented 7 teams in the IPL. Prior to KXIP, he had played for Rajasthan Royals (RR), Delhi Daredevils (DD), Pune Warriors India (PWI), Sunrisers Hyderabad (SRH), Mumbai Indians (MI) and Gujarat Lions.

“It’s a little bit embarrassing to be honest,” Finch was quoted as saying by cricket.com.au. “Two of the teams that I played for – one was Rajasthan that I came in as a replacement player and only played the last game of the tournament. The other was Pune (and) the year after I captained, they folded. I suppose you could almost take two of them out. It’s still seven – it’s a lot isn’t it?”

Finch was dismissed LBW by Umesh Yadav on Friday. Two days later, he was trapped plumb by Imran Tahir. On both occasions, he was dismissed off the first ball. KXIP will face SRH on Thursday and the star Australian will desperately hope for some runs. 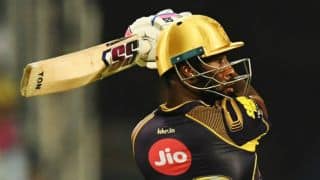