Andre Russell has showed signs of weakness against the turning ball, feels Kuldeep Yadav, insisting he has enough tricks up his sleeves to outwit the big-hitting West Indian in the World Cup.

Russell has been a picture of consistency for Kolkata Knight Riders, amassing 257 runs from just 121 balls with a stunning ball striking rate of 212.39 in this IPL. (READ: Bruised KKR face confident Capitals)

However, his KKR teammate Kuldeep said he has found a chink in Russell’s armour which he will look to exploit during the May 30-July 14 showpiece event.

“He has some problems facing a turning ball. If the ball is turning, then he has a weakness,” the 24-year-old said.

“It’s not just this, I’ve different plans to unleash against him in the World Cup. I know how to stop him and I’m very clear in my mind,” he added.

He has been sharing the dressing room with Russell but Kuldeep conceded that he has never bowled to him at the nets. “He does not take chance against spinners. He’s a terror for pacers. And I’ve never bowled him at the nets. You are always under pressure when you’re hit for two sixes in a row,” he said.

“It’s important how you comeback. All it takes is one ball to get the batsman out. You can assess a player’s character by that.”

Kuldeep has so far taken just three wickets from six matches but the India wrist spinner said he is happy with his performance and he has matured as a cricketer.

“If I’m not getting wickets it does not mean I’m not bowling well. Now I play as a matured cricketer and think more about the team. Even as I’m not taking wickets, my economy rate is tight,” he pointed out.

“I feel in this IPL batsmen are not attacking me so much. The batsmen are no more hitting big shots against me. I’m conceding three-four boundaries in every match which means batsmen are trying to play safe barring one match against Delhi.”

“It’s such a format, you may have a bad day where you’re hit for runs. I’m not a magician who will do well in every match. You cannot say I will take so many wickets,” he said.

He cited the example of his fellow India spinner Yuzvendra Chahal, who has taken nine wickets from six matches but his team Royal Challengers Bangalore are yet to win a match.

“Chahal performing well but team is not doing well. You have to play according to your plan. It does not matter if you take nine wickets when your team is at the bottom. I don’t think I’m not bowling well,” he reiterated.

Kuldeep will have a role to play when KKR takes on Delhi Capitals at the Eden Gardens Friday.

He, however, blamed the Eden wicket for not aiding spinners anymore. “The wicket does not help spinners anymore as it used to three-four years ago. It has become batting-friendly wicket. Good for T20 cricket,” he said.

The World Cup is immediately after the IPL and late-night matches and a hectic schedule is taking a toll on players but Kuldeep said they’re smart enough to handle themselves.

“IPL is very different than World Cup. There’s no pressure in franchise cricket. You are under a lot of pressure when you play for India. Someone doing well in IPL also struggles for India. But of course you carry that confidence,” Kuldeep signed off. 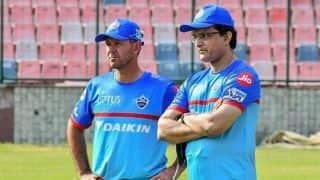