The talking points ahead of today's IPL 2019 match between Chennai and Delhi.

Today’s IPL match pits together the two teams sitting at the top of the 2019 points table – league leaders Delhi Capitals and defending champions Chennai Super Kings, both of whom are also the only sides to have qualified for the playoffs.

Ahead of match 50, here are the talking points:

MS Dhoni missed the last match against Mumbai Indians, and his impact was felt as the home team suffered a big loss. The CSK captain has been “pretty sick” during the week but his recovery is “progressing” according to CSK coach Stephen Fleming.

This IPL, Dhoni has missed two matches and CSK have lost both. His leadership and batting have been a huge factor in CSK remaining in the top two all season, and if Dhoni is again absent, as expected, then Delhi are looking like firm favourites.

Ravindra Jadeja and Faf du Plessis were also ruled out of the match against Mumbai, as they were both unwell. Now that the two players are recovered, they should be back in the CSK lineup.

If included, Jadeja could replace Mitchell Santner. If he gets the nod, du Plessis will resume opening which means that Murali Vijay will drop out of CSK’s XI.

But wait …what about Santner?

That said, CSK could strongly consider retaining Santner alongside Jadeja considering the number of left-hand batsmen in Delhi’s lineup. The New Zealand left-arm spinner has claimed two wickets in 14 deliveries bowled to left-handers in this IPL, while conceding only nine runs.

In CSK’s loss to Mumbai, Santner had excellent figures of 2/13 in his four overs and later scored 22 off 20 balls to try and revive a floundering chase. With Vijay scoring 38 in his first game this season, there could be the temptation to hold du Plessis and play both Jadeja and Santner on an expected slow turning surface in Chennai.

The battle for No 1

Both teams have tussled for the top spot on the IPL 2019 points table. Twice Delhi took over from CSK, and only once have CSK reclaimed it. Shreyas Iyer’s team is in form with six wins in their last seven matches, and they will be desperate to hold onto No 1 to avoid playing the Eliminator in the playoffs.

The top team goes into Qualifier 1, from where the winner proceeds straight to the IPL final on May 12.

CSK, with three defeats in their previous four games, and looking to once again be without Dhoni, have a tough job today. 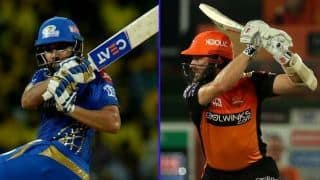 Chennai Super Kings vs Delhi Capitals, IPL 2019, LIVE streaming: Teams, time in IST and where to watch on TV and online in India