While Harbhajan and Tahir combined to claim four wickets between them for 35 runs in eight overs, Deepak Chahar returned an impressive 4-0-20-3, that had Kolkata limp to 108/9

In the battle of spinners among the top two teams of the IPL 2019 so far, it was the experience of Harbhajan Singh and Imran Tahir that trumped the guile of Sunil Narine, Kuldeep Yadav and Piyush Chawla as Chennai Super Kings registered their fifth win in six matches, to go clear of the rest of the field in the points tally, with a seven-wicket win over Kolkata Knight Riders in Match 23 on a tricky MA Chidambaram track on Tuesday. (SCORECARD: CSK vs KKR)

While Harbhajan and Tahir combined to claim four wickets between them for 35 runs in eight overs, the medium-pace of Deepak Chahar, fast becoming gun bowler for MS Dhoni, returned an impressive 4-0-20-3, that had Kolkata limp to 108/9, owed largely to Andre Russell’s unbeaten 50 off 44 balls. (HIGHLIGHTS: CSK vs KKR)

The Kolkata spin trio did manage to keep a lid of Chennai ‘s scoring rate, but Faf du Plessis, held the innings together and anchored the chase with an unbeaten 43 off 45 balls. Ambati Rayudu made 21 off 31 with handy contributions from Shane Watson (17) and Suresh Raina (14). Chennai overhauled the target with 16 balls remaining.

Chennai did lose Watson early in the third over caught at deep square Chawla and off Narine and when Narine and Chawla combined once again to remove Suresh Raina, caught at deep mid, hopes of a Kolkata comeback rose, but du Plessis put his head down and added 46 runs with Rayudu to put Chennai on course for a win.

Chawla was tidy returning 1/28 in his four, while Narine’s 3.2 was taken for 24 runs but he took two wickets. Harry Gurnee, Kolkata’s Man of the Match in their last game leaked 20 in his two.

Earlier, after being put in to bat, Kolkata had a horror start finding themselves 9/3 by the third over. While Chris Lynn was undone by the lack of bounce off a Chahar length delivery and was trapped in front for a five-ball duck, the gamble of Sunil Narine didn’t work against the guile of Harbhajan. But, with in-form Nitish Rana and Robin Uthappa handing out their wickets, Kolkata were in trouble.

Rana went for a cross batted shot on a slow Chepauk track and paid the price, failing to time the ball and was caught well by Ambati Rayudu at short mid wicket off the bowling off Chahar.

Local player and Kolkata skipper Dinesh Karthik, with Robin Uthappa, had a massive task of rebuilding the innings ahead of them and when Uthappa got back to back boundaries off Chahar, it looked like the experienced duo could very well set Kolkata on course.

However, after Uthappa hit his second four off the over, with a pull towards mid wicket, Dhoni kept a man there and Uthappa, again went for a pull, only to be caught by Kedar Jadhav.

By the ninth over, Karthik too was sent packing when he tried to flick a fullish delivery from Tahir, only to be caught well by Harbhajan at mid wicket. Kolkata slumped to 44/5, which soon become 47/6 when Tahir, in his second over, had Shubman Gill stumped by Dhoni for 9.

Tahir could have had the big-hitting Russell in his third over, but Harbhajan made a hash of a running catch. Russell failed to read a leg break and went for  slog sweep, hoping it to be a googly and ended up edging it. The West Indian was on eight.

Russell then got a maximum in the over, but continued to struggle against Tahir. Harbhajan got his second wicket of the night foxing Chawla (stumped), and then had Kuldeep run-out.

Ravindra Jadeja added the scalp of Prasidh Krishna, as Kolkata slumped to 79/9 in 17 overs. However, Russell tried his best to push the total with No.11 Harry Gurney at the other end, and the the Jamaican farmed strike in the death over, hitting five fours and three six in his innings. 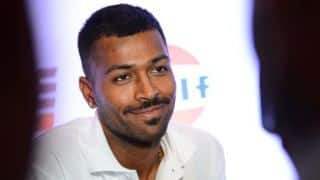