The talking points ahead of today's IPL 2019 Qualifier 1 match between Chennai and Mumbai.

Since 2013, at home, CSK have lost only four matches – and three of them have been to Mumbai Indians.

The winner of today’s match goes straight to the IPL final on Sunday, while the losing team gets another shot in Qualifier 2.

Ahead of today’s IPL Qualifer, here are the talking points:

Fact: Mumbai Indians are the only team to beat CSK in Chennai this season. Fact: CSK have lost six of their last eight matches against MI.

But this is the IPL playoffs, where Dhoni’s team have a 3-1 record over MI. Who dares, wins?

Last month, before MI hosted CSK at the Wankhede Stadium in a match which the home team won, Rohit termed MI vs CSK as the El Clasico of the IPL. The fans on both side will not dispute such a statement, for Mumbai and Chennai is indeed the hottest competition in the IPL. (READ: MI vs CSK in IPL playoffs over the years)

Will Raina deliver another playoffs special?

He hasn’t had a tournament to remember, but Suresh Raina has a history of dazzling in IPL playoffs, Will we see another special innings from the CSK behemoth?

From 14 innings in IPL playoffs since 2008, Raina has made 449 runs and has delivered several match-winning knocks to help CSK through to the final. This season, he has made 359 runs from 14 innings at an average of 27.61 with three half-centuries. Two of those came in the final two games against Delhi Capitals and Kings XI Punjab, which augurs well for CSK. (READ: The best of Suresh Raina in IPL playoffs)

Without Jadhav, who do CSK turn to?

With Kedar Jadhav ruled out, the home team will in all probability give Dhruv Shorey another opportunity in the middle order. The other option is to replace Shane Watson with Mitchell Santner considering the surface. But then this is the playoffs, and given the faith that CSK have shown Watson throughout a poor IPL 2019, it would be a bold call.

Santner played the last game against MI, which CSK lost, and took 2/13 in his four overs. (READ: Dream11 Predictions for Qualifier 1)

After Andre Russsell, the most explosive allrounder of IPL 2019 has been Hardik Pandya. He has been in strong form with 373 runs in 13 innings, with 28 sixes and 26 fours. Pandya’s bowling has not been as good as he or MI would have liked, but he ended the league stage with 14 wickets. Some electric fielding have added to his all-round value.

Against CSK’s spinners on a gripping surface, could Mumbai send Pandya up the order? He has struck at a strike-rate of 205 against spin this season, so there is logic to the move.

Qualifier 1 will be the 100th appearance for CSK by Ravindra Jadeja, and should the defending champions beat MI it will be their 100th victory. 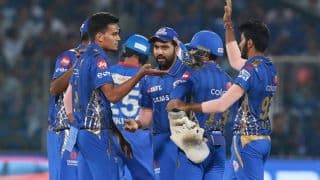