IPL 2019: Can the Orange Army give Jonny Bairstow a fitting farewell?

IPL 2019: Can the Orange Army give Jonny Bairstow a fitting farewell?

This will be the last match for Bairstow, who will return to England after this match.

After three losses in a row, last season s runners-up Sunrisers Hyderabad last week won both their matches to move back into the top four of the IPL 2019 points table.

In this same time, defending champions Chennai Super Kings lost both their games but remain No 1 in the league with 14 points.

Match 41 of IPL 12 pits the two teams against each other on Tuesday, for the second time in five days.

So much of SRH s success has been based on the performances of their openers David Warner and Jonny Bairstow, who have recorded all three of this season s best totals in the Powerplay overs. The last time these two teams met was last week, when Rashid Khan helped quell CSK s batsmen before Warner and Bairstow put on a blazing opening stand to end their team s losing streak.

This will be the last match for Bairstow, who will return to England after this match. What chances of a fitting farewell? (FULL PREVIEW, CLICK HERE) 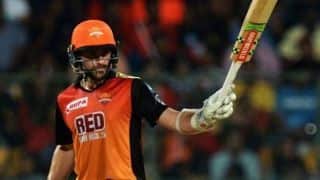