Kolkata, who will be eager to complete a hat-trick of wins as they, will take on Delhi on Saturday.

Delhi Capitals (DC) all-rounder Chris Morris is expected to take on his Kolkata Knight Riders (KKR) counterpart Andre Russell in their Indian Premier League (IPL) game at the Feroz Shah Kotla on Saturday and the South African said that he is up for the challenge.

“He (Russell) is an absolute genius. It will be a case of ‘if he misses, I hit’. I won’t give away too many secrets. I might look like a duck, but my brain is working overtime and I will look to trust my training. (ALSO READ: Kolkata vs Punjab highlights: Russell gets a life, Rana has a blast)

“We have got similar roles. He bats a little higher. Our job is to hit sixes and pick up wickets. But maybe he has a little more responsibility as a batsman than me,” Morris said on the eve of the match.

Asked if he would take the new ball or bowl at the death, Morris said: “I haven’t spoken about my role, but I will take up the all-rounder’s role. I don’t think I will take the new ball, and will probably bowl at the death. I like to bring a little energy to the squad. I’m really looking forward to get onto the park.” (ALSO READ: Glad that I don’t have to bowl to Russell: Lockie Ferguson)

The Kotla wicket has been low and slow this year and Morris agreed that it is one of the biggest differences at the venue this season.

“The biggest difference is that it is a little slower and turning a bit. The wicket here has been good and quick, but it’s a little bit on the slower side this time. There is natural variation in the wicket,” he said.

With Morris coming in, there might be a change in Rishabh Pant’s batting position, but the all-rounder said the wicketkeeper-batsman is a quality performer and can bat at any position.

“Doesn’t matter where Pant bats, he is good wherever he bats. My role is to play hard at the end,” Morris said with a smile on his face. 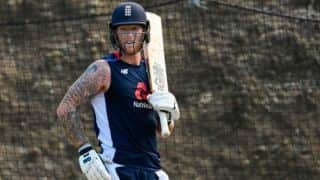