Delhi Capitals skipper Shreyas Iyer won the toss and elected to bowl first against King XI Punjab in Match 37 of the IPL 2019 at the Feroz Shah Kotla on Saturday.

Host of changes for both the teams – three each to be precise. Delhi bring in Sandeep Lammichhane, Colin Ingram and it’s a debut for Sherfane Rutherford. For Kings XI Punjab, spin bowling allrounder Harpreet Brar gets his debut game while Sam Curran and in comes Hardus Viljoen.

Punjab s fortunes have oscillated between the sublime and the mediocre. They have not progressed beyond two wins in a row, and have lost three of their last five matches.

DC are fourth on the IPL 2019 points table and KXIP are last out of eight teams. Shreyas Iyer s DC is undergoing a slump and will hope to end it by beating KXIP. 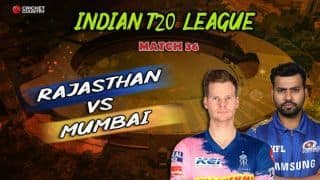