Mumbai Indians' captain Rohit Sharma won the toss and opt to bat first against Delhi Capitals in Match 34 of the IPL 2019 at the Feroz Shah Kotla, New Delhi on Thursday

Mumbai Indians‘ captain Rohit Sharma won the toss and opt to bat first against Delhi Capitals in Match 34 of the IPL 2019 at the Feroz Shah Kotla, New Delhi on Thursday. Both Delhi and Mumbai have ten points each from eight games, but Delhi are ahead owing to superior run-rate in the points tally at No.2, while Mumbai are at No.3.

Delhi are unchanged, while Mumbai bring in Ben Cutting in place of a sick Ishan Kishan, while Jayant Yadav gets a game in place of Jason Behrendorff.

Five wins and three defeats separated by only net-run rate. A look at the IPLstandings and one would get the idea that Delhi Capitals and Mumbai Indians are on an equal footing. Dig a little deeper and DC seem a slightly stronger just on recent form. They have enjoyed an excellent away form, having romped to three consecutive victories in a row during which they have beaten Royal Challengers Bangalore, Kolkata Knight Riders and Sunrisers Hyderabad. On the other hand, MI have played their last three matches at home, winning two and losing one. Add to it their previous meeting when DC prevailed in a 37-run win, also an away win.

The two teams now meet to further solidify their chances of making the cut for the playoffs. The venue makes their tasks trickier. While teams of the likes of Chennai Super Kings have been unbeatable at home, DC have struggled. Feroz Shah Kotla hasn t been kind to them this season and even their head coach Ricky Ponting has criticised it has the worst ever following a defeat to SRH when they struggled their way to 129/8 in chase of 132 with the match dominated by spinners.

It s been two weeks since Kotla last hosted a match. The message to the groundsmen is clear prepare a track that suits the DC. MI makes their task trickier as well. Should they dish out a belter, they will end up giving a freehand to in-form Kieron Pollard and Hardik Pandya. Should they produce a bouncy surface, it will again be familiar conditions for MI who have enjoyed similar pitches at Wankhede. 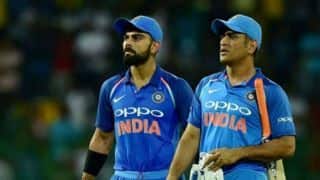