Mohammad Nabi, who had scalped four wickets against Royal Challengers Bangalore in the previous game, Bhuvneshwar and Siddarth Kaul got two wickets each as DC batsmen, barring skipper Shreyas Iyer, did not apply themselves on what was a rather sluggish pitch.

The hometeam did not to find any momentum and lost the wickets at the regular intervals. While Prithvi Shaw did hit two fours in the first over, Bhuvneshwar dismissed him in the third over to give SRH their first breakthrough. Shikhar Dhawan too did not last long and got out in the final over of the powerplay. (ALSO READ: Delhi vs Hyderabad: What can we expect to see?)

While the DC skipper Shreyas Iyer scored 43, his side continued to lost wickets at regular intervals. The trio of Rishabh Pant, who had set the stage on fire in Delhi’s opening game against Mumbai Indians, Rahul Tewatia and Colin Ingram scored five runs each as DC were reduced to 75/5. While Deepak Hooda removed Pant, Nabi dismissed Tewatia before Manish Pandey’s brilliance in the field saw Ingram walk back to the dugout.

Iyer was the next man to get out as Rashid Khan gave SRH their sixth wicket. While Axar Patel did hit some big blows in the final over, DC could only score 129 runs, batting first. 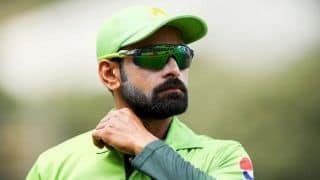