With a win over Delhi Capitals, Sunrisers Hyderabad completed a hat-trick of wins in the IPL 2019.

Chasing 130, Bairstow, who had scored a hundred in the previous game, led Hyderabad’s charge as the England batsman hammered 48 off 28 balls, hitting 9 fours and a six. Rahul Tewatia dismissed Bairstow to end a quickfire 64-run opening stand between Bairstow and David Warner. The left-hander followed Bairstow to the dug-out soon after being dismissed by Kagiso Rabada in the eighth over.

DC managed to stem the flow of runs, disallowing the middle-order of Vijay Shankar, Manish Pandey and Deepak Hooda any chances to score quick runs. The three could only score 16, 10 and 10 respectively as the home team kept the things tight.

While DC did their bit to push SRH on the backfoot, the target was a little too low for their liking as Mohammad Nabi and Yusuf Pathan kept their nerves, with the Afghanistan allrounder hitting wins to seal SRH’s win with nine balls to spare.

Earlier, Bhuvneshwar Kumar won the toss and elected to bowl and his bowlers justified his decision and restricted DC to 129/8 on what was a rather sluggish wicket. Nabi, who had scalped four wickets against Royal Challengers Bangalore in the previous game, Bhuvneshwar and Siddarth Kaul got two wickets each as DC batsmen, barring skipper Shreyas Iyer, did not apply themselves. (In Pics: IPL 2019, Match 16, Delhi Capitals vs Sunrisers Hyderabad)

DC did not to find any momentum and lost the wickets at the regular intervals. While Prithvi Shaw did hit two fours in the first over, Bhuvneshwar dismissed him in the third over to give SRH their first breakthrough. Shikhar Dhawan too did not last long and got out in the final over of the powerplay.

While Iyer scored 43, his side continued to lost wickets at regular intervals. The trio of Rishabh Pant, who had set the stage on fire in Delhi s opening game against Mumbai Indians, Tewatia and Colin Ingram scored five runs each as DC were reduced to 75/5. While Hooda removed Pant, Nabi dismissed Tewatia before Pandey s brilliance in the field saw Ingram walk back to the dugout.

Iyer was the next man to get out as Rashid Khan gave SRH their sixth wicket. And it was only due to a couple of sixes from Axar Patel towards in the final over that Delhi were able to slightly lift themselves towards a decent total. 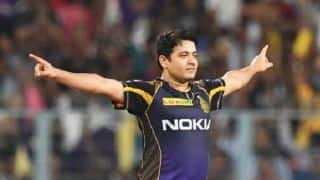