Ponting admitted that Delhi did not get enough on the board, but backed the call to bat first.

Ricky Ponting, coach of the Delhi franchise, has defended Shreyas Iyer’s decision to bat against Chennai on Tuesday because of the nature of surfaces in the 2019 Indian T20 League but admitted that the hosts were well short of their expected target.

Delhi managed to score 147/6 in their 20 overs, a total which defending champions Chennai chased down with six wickets and two balls remaining. Though Ponting accepted that his team fell well short of a winning total – at one stage Delhi were 118/2 after 1 overs – he felt that conceding too many runs early in Chennai’s chase was where Delhi were also hurt. (READ: Shane Watson, Dwayne Bravo hand Chennai second win)

“Batting looked difficult at the end [and] though the middle parts of the innings,” said Ponting after the match at the Feroz Shah Kotla. “If we hadn’t given away so many runs in the Powerplay, I think CSK would have found that target really hard to chase down.

“Through history, 165 is our average score here. Last year, our average score here was about 190. So, we are a long way off from what we wanted to achieve today. If we had posted even 165, I reckon it would have been a really tough run-chase.” (READ: MS Dhoni is ‘the best captain in the world’: Dwayne Bravo)

Asked about the tactic to bat first, Ponting cited Delhi’s opening match when they did the same and put up 213.

“We won batting first in Mumbai,” he said. “It worked for us there. So, whatever you do first, you just have to do it well. We know at the toss [MS] Dhoni said he would have bowled first. That doesn’t worry us. [At the] end of the day, every team has to do what they think suits their team the best. With that wicket looking as dry as it did before the game started, we thought it would be a lot harder to bat in the second innings. If we had got a few more runs, the wicket would have looked even harder to bat on.”

Delhi next play Kolkata on March 30. 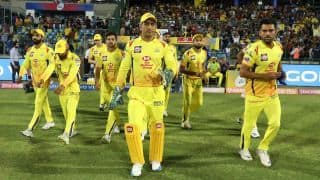 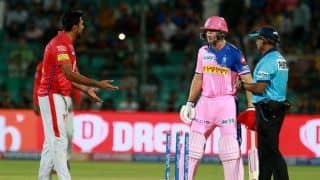