Keemo Paul scalped three wickets while Ishant Sharma scalped two as DC did not allow SRH to post a big total on the board.

Keemo Paul and Ishant Sharma shared five wickets between themselves as Delhi Capitals (DC) restricted Sunrisers Hyderabad (SRH) to 162/8 in the Eliminator of the Indian Premier League (IPL) 2019 at the Dr YS Rajasekhara Reddy ACA-VDCA Cricket Stadium in Visakhapatnam on Wednesday.

There was a drama straightway as Wriddhiman Saha survived an LBW call on the first delivery of the match, courtesy DRS. While Saha could not make most of the same and was dismissed by Ishant Sharma for eight, Martin Guptill was off to a flying start as SRH scored 54 runs in the powerplay, with the New Zealand batsman scoring 35 of them in 17 balls, with the help of 4 sixes and a four.

However, Amit Mishra struck in the first over after powerplay to end Guptill s blitz and gave DC their second breakthrough as Paul took a tumbling catch in the deep. With Guptill’s wicket, DC pulled back the things as SRH could only score 17 runs in the four overs after powerplay.

While the duo of Kane Williamson and Manish Pandey added 34 runs together, they failed to score at brisk pace and the Indian batsman eventually perished for 34, going for a big shot as Paul scalped his first wicket of the night. (IPL 2019, DC vs SRH: FOLLOW LATEST UPDATES)

SRH, meanwhile, brought up their hundred in the 15th over. However, Ishant, who returned to attack to bowl his final over, struck for the second time of the night as he disturbed the timber to end Williamson’s stay in the middle.

However, with Mohammad Nabi’s arrival in the middle, SRH managed to up the pace as the Afghanistan allrounder and Vijay Shankar added 36 runs off 16 balls before the Indian allrounder got out after scoring a brisk 25 off 11 balls, hitting 2 fours and as many sixes. Nabi, meanwhile, got out in the final over after scoring 20 off 13 balls as SRH, despite Guptill’s bright start and Nabi-Vijay Shankar’s quickfire knocks, were restricted to 162/8. 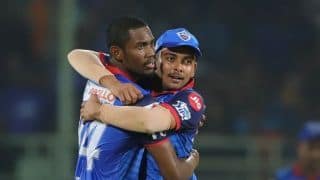