Bumrah returned with exquisite figures of two for 14 in his four overs that won him the Man of the Match award.

Mumbai Indians pacer Jasprit Bumrah remain unscathed in the entire Indian Premier League (IPL 2019) and ensured he continued his exceptional form in the finale against Chennai Super Kings returning with exquisite figures of two for 14 in his four overs that won him the Man of the Match award after MI pulled off a thrilling one-run victory in the final on Sunday.

“Very happy. In the finals we know that it can get close and winning the title with MI is a special feeling,” Bumrah said at the post-match ceremony.

Elaborating on the secret to his success bowling accurate lengths with utmost precision, he added: “Today, surprisingly, I was very calm, I wasn’t panicking at all and very happy to contribute to the team’s success. I only take one ball and one day at a time and if you think like that you don’t feel pressure at all.”

Bumrah also won praises for his touching gesture towards Quinton de Kock, who committed a costly error after he couldn’t gather the ball which went for a boundary in the 19th over.

Rather than expressing his anger at the South Africa glovesman, Bumrah chose to go up to the wicketkeeper and pat him on the back. The moment was captured on camera and lauded by the commentators and fans on social media. 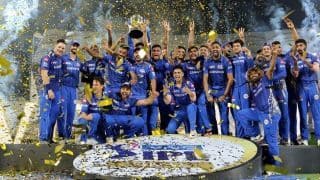