Pollard promoted himself up the batting order, at No. 4, and took on an unlikely chase to smash 31-ball 83 leading the hunt of 198

Captaining the side in the absence of an injured Rohit Sharma, Pollard promoted himself up the batting order, at No. 4, and took on an unlikely chase to smash 31-ball 83 leading the hunt of 198 at the Wankhede Stadium. (READ: Pollard blitz overpowers Rahul ton)

His breath-taking innings has given rise to talks of a possible comeback for West Indies for whom he last played October 2016. With the World Cup just over a month away, provided his maintains his form, Pollard could well be on his way to England for the marquee tournament.

Unfazed by the talks, he just wants to make the most of his ‘god-given’ talent.

“Every time I get the opportunity to play, I want to do my best. There has been a lot of turmoil in West Indies cricket over the last couple of years. We have seen in the last couple of weeks there’s a change. Pollard was one of the guys blacklisted. The most I can do every time I step on the cricket field is try to put runs on the board. There’s people there who have the job to select and whatever and let’s see how that goes. As I said, I’m 31 years, Chris Gayle is still playing, he’s 39, and he’s whacking it all around.”

With several West Indies stars doing well in the ongoing IPL and add to it the recent results against England at home earlier this year, the former two-time World Cup winners are being touted as one of the sides to watch out for if not the favourites.

Pollard feels West Indies can present a strong challenge at the World Cup that gets underway from May 30. “Yeah, of course you can say that. But again, as I said that’s why there’s people we have a new chairman of selectors, there’s a new president of the cricket board, and as I said you take it as it comes. Last year, you might not have been asking me that question. Yes, I scored runs tonight so all sorts of questions will come but for me it’s just about enjoying cricket and doing my best with my god-given talent,” he said.

He added, “We know what we can do and I think Chris batted superbly. A fellow West Indian is [Andre] Russell he’s smacking the ball and it’s great to see the way he’s hitting the ball and [Sunil] Narine. These guys are having a good tournament and again, when your mind is free, you just go out and enjoy cricket. You don’t think about much because there are a lot of opinions, there are a lot of things, but it’s people as close to you and what they think matters.”

Talking about his own performance, Pollard, while reflecting on 2018, said he still has a lot to offer. “It is what it is. 2018 is gone and obviously when you are losing, people tend to have all sorts of opinion – who have not even played the game and even who have played the game. You can’t stop people from that. I’m 31 years of age and I have a lot of cricket left in me. People close to me, back me and that’s most important. There’s better things than just winning and losing. There’s family and things to live for.”

Despite controlling KXIP batsmen in the early stages of the match and then in the middle overs, MI bowlers lost their way in the late stage when they were thwacked all over the park. Pollard, the stand-in captain, defended his bowlers saying the pitch was difficult to bowl on. “Was a difficult pitch to bowl on and good to bat on, so we did well with the ball after the start they got. We did pull things back in the middle overs a bit but lost the plot at the end. Again, can’t be harsh on the bowlers. We finished on the right end of the result and thanks to God for that to,” he said.

Despite his match-winning knock as the leader, Pollard will have absolutely no qualms in handing back the team’s rein to Rohit when he returns to the Playing XI. “Obviously, Rohit is the captain of the team and it was only a precautionary measure for the team. He should be back in the next game. I would gladly give it back to him and field at the boundary, while also thinking of what to contribute to the team,” he said. 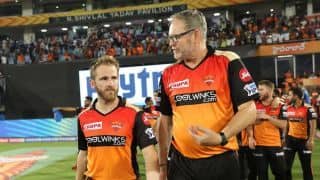