Pandya smashed an unbeaten 25 from just eight balls and in the company of big-hitting West Indian Kieron Pollard (17 not out from 7 balls) went for an all-out assault on the CSK bowling attack to help MI post 170 for 5 after struggling at 57 for 3 at halfway stage at the Wankhede Stadium.

Pandya hit three sixes and one four in his unbeaten blitzkrieg and later picked up three wickets for 20 runs, including that of rival team skipper Mahendra Singh Dhoni, to help MI halt CSK at 133 for 8 and hand them their first defeat of the season.

“I am a massive fan (of Pandya), I think he is a wonderful player. His confidence is up, looks like he has a good thing going with what he is doing at the death. Plans should be now for teams to combat that. We were happy with what we were trying to do but executed it poorly,” said Fleming at the post-match media conference on Wednesday.

“He is a quality player. I think he is one of Mumbai’s key weapons and one of India’s key players going forward. If you keep him out of the game you often go on to win. But today with both bat and ball he was excellent,” said the former New Zealand captain.

Fleming said his team was in control for the major part of the game. “Over the last 5-6 overs we came a little bit unstuck. We had an extra seamer. In the last three or four overs, the game got away from us. We had been keeping things simple but today it got a bit complicated. It was a tough ask,” he said.

He agreed that a Twenty20 game should not extend for four hours as it did on Wednesday night. “I think it is going to call for a collective effort to speed up things. Moisture (because of dew) plays its part. Wiping the ball is a consideration. Cricket in general is played at a pace below what it needs to be. Cricket needs to be speeded up in all forms of the game. If it puts pressure on captains and bowlers, so be it. We need to ask captains and bowlers to be a little bit surer in their plans.”

The CSK head coach also conceded that his team, with a lot of players in their thirties, could have fielded better. “That was one of the downsides with athletes who are a little bit older. Today we were a bit passive with movement around the field. We need to be at our absolute best. For the majority of the innings we were pretty good, but we are not going to be one of the top fielding sides in the competition,” Fleming said.

Fleming defended the move to leave out senior offspinner Harbhajan Singh from the playing eleven. “We are happy with what we have done (in picking the eleven). Today we were spot on (in picking an extra pace bowler). Harbhajan is bowling beautifully. We would expect him to get back in the team when conditions suit him.”

Asked why Shane Watson was not being used as a bowler, Fleming said the big-built Australian was playing as a specialist batsman in the competition. “He has not bowled for quite a while, has not bowled in the Big Bash League. He is playing for us as a specialist batsman. It is a risk to ask him to bowl. His body is such that we did not want to risk him, especially as we have six bowlers,” Fleming replied. 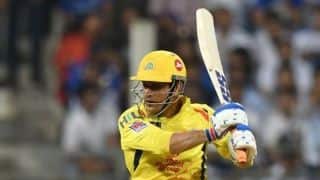