Samson's unbeaten ton went in vain as chasing a mammoth 199-run target, Warner set up the platform, hitting 69 off 37 balls.

Rajasthan Royals captain Ajinkya Rahane on Friday said it’s difficult for defend any total against an opposition which has an in-form batsman like David Warner up their ranks. (READ: Warner, Bairstow trump Samson, Rahane)

Sanju Samson‘s (102 not out) second IPL ton was overshadowed by Warner’s blistering fifty as Sunrisers Hyderabad beat Rajasthan by five wickets to register their first win of the season.

Samson’s unbeaten ton went in vain as chasing a mammoth 199-run target, Warner set up the platform, hitting 69 off 37 balls, and together with Jonny Bairstow (45 off 28) stitched a century stand for the opening wicket as Hyderabad overhauled the target with an over to spare.

“I think first of all, we thought 190 plus was very good score. The wicket was stopping a bit and we were aiming to get 150 plus. But credit to Sunrisers for the momentum they got in the powerplay. When someone like Warner bats like that, it’s very less margins for the bowler,” Rahane said at the post-match presentation ceremony.

“They didn’t lose momentum throughout. When he (Warner) got out, Vijay Shankar batted well too. Sanju’s been fantastic for us. We all know how talented he is. I’m sure he’s also hurt but he’ll go miles. Consistency is the key for him,” he added.

Hyderabad captain Kane Williamson credited Warner and Bairstow for setting up the platform for the win.

“It was a tough game, but Rajasthan Royals played really well. The openers set it up for us. It was a good collective effort. It certainly wasn’t easy. There are some areas we want to touch up on. We needed many parts to fire to chase near 200 and it was a good experience for us,” Williamson said.

Man-of-the-match Rashid Khan, who bowled an economical 1/24 spell and struck a four and six off Jofra Archer to finish off the chase, said he was happy with his performance.

“I just try my best to be positive in every game, in every department,” he said.

Talking about Jos Buttler’s dismissal, Rashid said: “I think that was the plan (to Buttler) as I’ve got him early previously. So I just bowled in good areas and see how it goes. I just tried my best to mix up my five leg-spinners.

“I realised it wasn’t a wicket where there will be too much turn. Yes, I have five different leg-spins, with different actions and grip,” he said.

Asked about his batting skill, the star Afghan cricketer said: “My coaches have given me a lot of confidence in the nets that I’m capable of hitting it anywhere.” 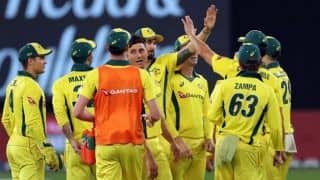 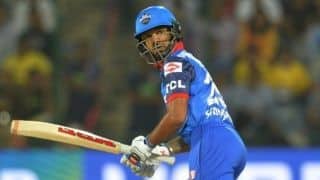