IPL 2019: It has been a good season for us, reckons Mumbai Indians' Krunal Pandya
By Press Trust of India

Mumbai Indians all-rounder Krunal Pandya Tuesday said though they have done well in the season so far, the three-time IPL champions are not yet thinking about the play offs.

While Delhi Capitals and Chennai Super Kings have booked the two slots for the playoffs, there is competition among five others teams for the remaining two positions.

Currently, Mumbai Indians, are placed third with 14 points from 12 games and they take on Sunrises Hyderabad on Thursday at the Wankhede Stadium here.

Sunrises Hyderabad are placed fourth on the points table with 12 points from 12 games.

“It (the season) has been very good for us (the team), specially like after playing 12 games, we are almost there at (with) 14 points and still there are two games to go, so it has been a good season for us,” said Krunal, who has picked up 8 wickets from 12 matches so far.

Krunal along with his Mumbai teammates South African Quinton De Kock and Ishan Kishan attended the ‘Kingfisher Bowl Out’ event at a mall in suburban Kurla.

The left handed batsman, who has scored just 167 runs this season, said that the team was focussing on the next two games and wanted to do well in those matches.

“I guess we (the team) are not thinking of (about) play-offs or anything. We are just focussing on next two games, which are league games, and we just want to do well in those two games and then (we will) see how it goes into the play offs,” Krunal noted.

After the Thursday game, Mumbai will face Kolkata Knight Riders in their last league game on Sunday here. 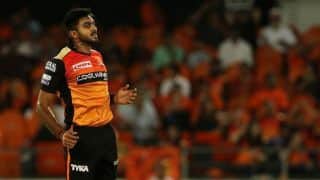