After missing five games this IPL season, Sunrisers Hyderabad captain Kane Williamson is set to return for the franchise’s next game on April 14.

Williamson, who injured himself during a Test match at home in March, has played only one of Hyderabad’s games in IPL 2019 but the franchise coach Tom Moody tweeted that the New Zealander is fit and ready for selection.

Yes, Kane will be fit for our next match!

In Williamson’s absence, Englishman Jonny Bairstow has opened the innings with David Warner and sits at third spot in this season’s run table.

The other overseas players that Hyderabad have played regularly are the Afghanistan pair of Rashid Khan and Mohammad Nabi. The team sits at fifth place on the IPL table after two straight defeats.

Moody also confirmed that left-arm pace bowler Khaleel Ahmed will be ready for selection against Delhi. 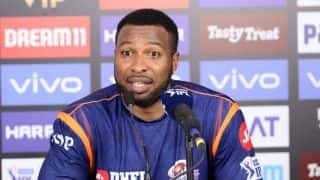