Shikhar Dhawan may missed out on his maiden Indian Premier League (IPL) hundred but his unbeaten 97-run innings powered Delhi Capitals (DC) to a seven-wicket win over Kolkata Knight Riders (KKR) at the Eden Gardens in Kolkata on Friday.

With Dhawan playing a pivotal role, the Shreyas Iyer-led DC side registered their second win over Dinesh Karthik and Co in IPL 2019.

Here are the main talking points from their clash:

6, 6,7,4,6 these have been the batting spots of Shubman Gill these IPL season before their Friday night clash against DC. As KKR made a triple-change to their playing XI, they had to field a fresh opening pair. Both Chris Lynn and Sunil Narine sat out and out walked Joe Denly and Gill. Before that, the highest India’s U-19 World Cup winning star had batted in IPL this season was fourth. Usually, he bats at No. 3. Dinesh Karthik promoted him right at the top. Denly was bowled for a first-ball duck. But Gill was determined to make use of the opportunity. He scored 65 off 39 with seven fours and two sixes his second IPL fifty while playing the role of an anchor, getting dislodged only in the 15th over.

On wonders how KKR’s season would have shaped up if Andre Russell had somehow been missing in action. Time and again, he has been at the forefront of several rescue acts most of them resulting in victories from difficult positions. Friday night wasn’t to be one of them, but he continued to belt boundaries at will. He struck his sixth 40+ total of the season in as many innings. It was another of his brutal knock 45 off 21 with three fours and four sixes. 26 off those runs were scored against Kagiso Rabada the man who bowled that inch-perfect yorker to have him bowled in the Super Over at Feroz Shah Kotla. Having lost the first battle against the speedster, Russell three sixes and a four off him in their second meeting to make at one-all. Will we see them squaring off again?

DC were desperate to secure the signing of Shikhar Dhawan, team advisor Sourav Ganguly said on Friday. With one half-century in six outings, Dhawan was failing to meet their expectations. That his slow scoring-rate was hurting his franchise was a fact acknowledged by team coach Ricky Ponting openly. The left-hander more than made up for his previous failures with a ‘class-act’ at Eden Gardens. In a chase of 179, Dhawan unleashed a flurry of boundaries 11 fours and two sixes to score an impressive unbeaten 97 off 63, anchoring the successful win that pushed DC into top-four.

While other bowlers failed to keep batsmen on a leash, veteran Ishant Sharma used his experience to stand out from the crowd. He delivered four overs for 21 runs while claiming one wicket. 13 of his 24 legitimate deliveries were dot balls. Off him three fours were scored all by Gill. And guess what three of his four overs were in the Powerplay. His first over of the night was a wicket-maiden the wicket coming off the very first delivery of the match. 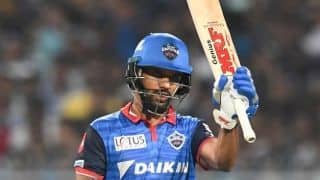 Once Shikhar Dhawan gets set, he takes the game away: Sourav Ganguly 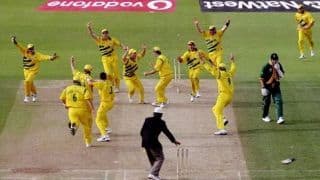