Both the teams have won their first game of the season and will be keen to seal a second successive win.

Two Tamil Nadu veterans Dinesh Karthik and R Ashwin will come face to face as Kolkata host Punjab in match six of the Indian T20 League 2019 at the Eden Gardens in Kolkata on Wednesday.

Both the teams have won their respective opening games Kolkata beating Hyderabad and Punjab defeating Rajasthan. However, the circumstances in which the results were achieved are drastically different. While Karthik and Co. won the opener after the Andre Russell blitz, Punjab s win came on the back of a controversial Mankading of Jos Buttler, executed by Ashwin. (ALSO READ: Ravi Ashwin mankads Jos Buttler during T20 League match: Twitter goes wild)

While Mankading debate will go on, with Ashwin facing a lot of heat from some of the former cricketers, Punjab will be keen to continue their winning run and seal the second successive win. (ALSO READ: Ashwin s actions represent him: Rajasthan coach Paddy Upton)

Kolkata though, playing the second home game, will be eager to get the better of Punjab and register their second win in a row this season.

What: Match 6, Kolkata vs Punjab

Weather: Sunny with a maximum high of 33 degrees Celsius

On TV: Star network (in India)

You can also follow LIVE coverage of the match on CricketCountry.com (Kolkata vs Punjab: SCORECARD)

Despite a win in the first game, Kolkata will like to get their fielding and bowling in top shape. They will also want Chris Lynn to come good and Sunil Narine to be fit, to bowl and to open the innings, scoring some quick runs at the top. Kolkata will also need to make sure that Kuldeep, who happens to be their premier bowler, completes his quota of overs. The left-arm chinaman bowled only two overs in the first over.

With Chris Gayle coming good and Sarfaraz Khan scoring a quickfire 46 not out off 29 balls, Ashwin is unlikely to make any changes to his batting order which set up Punjab s win in the opening game against Rajasthan.

Mankading controversy aside, Punjab bowlers held their nerve in the death overs and considering they will now be up against a big-hitter like Russell, Ashwin will like his bowlers to have an encore. 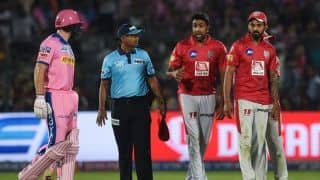 This mode of dismissal is akin to back-stabbing: BCCI official on Ashwin ‘mankading’ Buttler 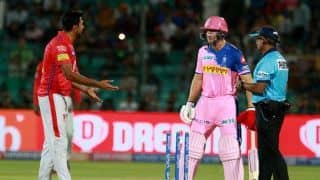