The big-hitting Jamaican scored unbeaten 80 off 40 balls before scalping two wickets and holding on to two catches as KKR ended their six-match losing streak to keep their playoff hopes alive.

Andre Russell starred with the bat, ball and in the field as Kolkata Knight Riders (KKR) beat Mumbai Indians (MI) at the Eden Gardens in Kolkata on Sunday in the 47th match of the Indian Premier League (IPL) 2019.

The big-hitting Jamaican scored unbeaten 80 off 40 balls before scalping two wickets and holding on to two catches as KKR ended their six-match losing streak to keep their playoff hopes alive.

Russel, an Avengers fan, highlighted how he went about his business on Sunday, saying this was one of his best T20 days.

“Yes, I am a fan of (Avengers), I am watching it for a while. If the fans say that I am a (super hero) I am happy. Hand-eye co-ordination, a good bat speed and balance is important. I generate a lot of power from the shoulders and core. Everything works together. You need to make sure your body is fit and strong in order to play those upward shots in those moments,” said Russell.

While there were the usual power hits from the Russell during his 40-ball stay in the middle, the West Indian, who hit eight sixes, hit one six over the covers off Jasprit Bumrah’s bowling.

“When the bowler is trying to outsmart you with a wide or slower ball. That shot was a surprise for me as well (the one I hit over covers),” said Russell.

The allrounder also said that his team has given itself a chance with a win over MI and hopeful that they win their next two games to make it to the playoffs.

“We have given ourselves a chance. Hopefully the result in the next two games goes our way,” said Russell before discussing his knock and highlighting that the team had to get a 200-plus on this wicket.

One of my best T20 days, definitely. We needed to get 200-plus but getting 230 was just enough. If it was just over 200 we would have been on the losing end. We kept our heads calm under pressure and executed our plans well,” concluded Russell. 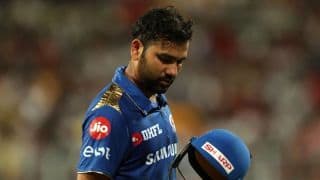