IPL 2019, KKR vs MI: It is good to see Andre Russell grow as a player, the maturity he's showing is great

Relieved with his team ending the six-match losing streak with a win over Mumbai Indians (MI) in the 47th match of the Indian Premier League (IPL) 2019 at the Eden Gardens in Kolkata on Sunday, Kolkata Knight Riders (KKR) skipper Dinesh Karthik lauded Andre Russell for his allround display against MI and highlighted the importance of getting the process right.

I think at the end of the day you should make sure your process is right. It might sound clich but it’s a high pressure sport. You gotta make sure everybody is in great space as it’s such a high-octane tournament. You need to stay healthy as a lot of back biting can happen in these types of situations and I am very aware about it. At the end of the day, it’s a game, you need to keep a smile, you need to be nice to others and you need to be happy. It shouldn’t be like that guy played so bad. I am aware about it. It’s hard work, it was a flat wicket and they came out all guns blazing, said the KKR skipper.

While KKR managed to seal a win, Hardik Pandya played a blitz, scoring 91 off 34 balls and on his way bringing up his highest IPL score and fastest fifty of the ongoing edition of the tournament. Karthik lauded Hardik s effort with the bat and also praised his team s bowlers for holding their nerves even as the MI allrounder went berserk.

Credit to Hardik, the way he played. Credit to my bowlers as well as they held on to their nerves. In these kind of games we were waiting for one bad shot, said the wicketkeeper-batsman.

Karthik was wholesome in his praise for Andre Russell. The Jamaican scored an unbeaten 80 off 40 balls and then went on to scalp two wickets and took two catches.

(Andre) Russell is a great player, he’s a special player and it’s good to see him grow as a player. The maturity he’s showing is great to see. I was just talking about the same to him. These balls cost a lot and we need to ask him to keep calm.

With KKR completed their home games and set to play Kings XI Punjab and MI away from home in their pursuit to make it to the playoffs, Karthik thanked the local fans for their support.

We live another day, that’s important and the crowd has been fantastic, concluded Karthik. 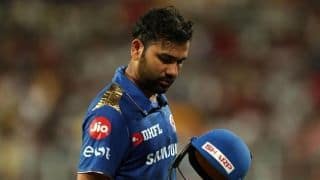