Andre Russell‘s 19-ball 49-run blitz spoilt David Warner s return as Kolkata beat Hyderabad by six wickets in the second match of the Indian T20 League 2019 at Eden Gardens in Kolkata on Sunday. Russell hit four sixes and as many fours as the two-time champions made a winning start to this year’s campaign.

Chasing 182, Kolkata lost Chris Lynn early as the right-hander mistimed a Shakib Al Hasan delivery and Rashid Khan made no mistake holding onto an easy catch. However, Nitish Rana and Robin Uthappa kept the scoreboard ticking for Kolkata. (Kolkata vs Hyderabad, Scorecard)

While Hyderabad had a chance to dismiss the latter when he was on 20, Yusuf Pathan dropped an easy catch in Rashid Khan s first over to give the right-hander a reprieve. Fortunately, it did not cost Hyderabad much as Siddarth Kaul removed Uthappa for 35 to break the 80-run partnership for the second wicket.

Dinesh Karthik did not last too long either as Sandeep Sharma dismissed the Kolkata skipper for two as Hyderabad struck in quick succession to push the hometeam on the backfoot in the 182-run chase.

Although Rana tried to keep Kolkata s hopes alive with a 47-ball 68-run knock, Rashid Khan sent the left-hander packing immediately after the play was resumed following the floodlight failure.

While Hyderabad were ahead in the game with Kolkata needing 64 runs in 27 balls, Russell changed the course of the match.

While the game was not over with Kolkata needing 13 runs off the final over, Shubman Gill hit two sixes off Shakib to seal a stunning win for the hometeam.

Earlier, Hyderabad, who were put in to bat, were powered to 181 by Warner’s 85. The left-hander, who did not play in the previous edition of the tournament following his involvement in the ball tampering scandal in South Africa last year, showed no signs of nerves in his 53-ball stay in the middle.

Warner and Jonny Bairstow, who was making his Indian T20 League debut, put up a 118-run partnership for the first wicket before Piyush Chawla dismissed the England wicketkeeper-batsman in the 13th over.

While Bairstow was watchful in his 35-ball 39-run knock, Warner kept the scorecard ticking as he brought up his 37th fifty in the T20 league. Kolkata did have a chance to dismiss Warner when he was on 68 but Dinesh Karthik dropped an easy catch.

However, Kolkata managed to deny Warner a hundred on the Indian T20 League return as Andre Russell got the left-hander out for 85 in the 16th over as Robin Uthappa held onto a low catch at the extra-cover.

Russell struck once again as Yusuf Pathan perished, scoring just a run. Vijay Shankar, who is vying for a spot in India s World Cup squad, meanwhile did his bit, scoring unbeaten 40 off 24 balls to push Hyderabad to 181. 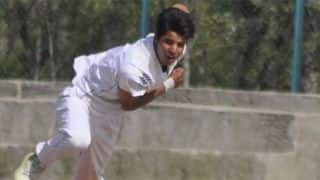