While the home team has made one change to their playing XI, CSK have gone unchanged in what is to be thei penultimate game of the IPL 2019 league stage.

R Ashwin has won the toss and Kings XI Punjab (KXIP) have elected to field against Chennai Super Kings (CSK) in the 55th match of the Indian Premier League (IPL) 2019 at the PCA-IS Bindra Stadium in Mohali on Sunday.

While the home team has made one change to their playing XI, CSK have gone unchanged in what is to be their last game in the league stage.

“We will be bowling first. We have not used many wickets repetitively. We have almost used all the wickets on the square. This is the second game on this pitch and it is generally good to bat. Probably bit slower as it is a day game,” said the KXIP skipper.

“Every game is important for the franchise. There are a lot players who would like to put their hand up and be counted. We have got some youngsters in the past who have done well and they are getting another game today. It is important, especially when you are playing a team like CSK, to be on top of your game. Winning will definitely boost the confidence and we are looking forward to this game,” he added. (IPL 2019, KXIP vs CSK: FOLLOW LATEST UPDATES)

“We have not had anybody going to the hospital, so we have only one change – Harpreet Brar comes in for Arshdeep Singh,” concluded Ashwin.

“Nothing really has changed and that’s how we look at it. Last game in the league stage, gives us an opportunity to sort every thing out before the important part of the tournament gets in. We are playing the same squad,” said MS Dhoni at the toss. Today’s Best Pick 11 for Dream11, My Team11 and Dotball – Here are the best pick for Today’s match between KXIP and CSK at 4PM 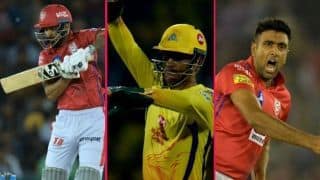