A win for either Punjab or Kolkata will solidify their chances of entering the IPL 2019 playoffs.

Game 52 of IPL 2019 on Friday is a must-win for both hosts Kings XI Punjab and Kolkata Knight Riders at the PCA Stadium in Mohali.

Had Sunrisers Hyderabad beaten Mumbai Indians on Thursday, today’s IPL match would have turned into a knockout. As it now stands, KXIP and KKR are in with a shot a the IPL playoffs even if one loses, but both teams would prefer not having to rely on other results going their way as well as permutations.

Here are the talking points for KXIP vs SRH:

You snooze, you lose

Dinesh Karthik’s KRR must beat KXIP to avoid falling one place lower on the 2019 IPL points table. The best that KKR can finish with is 14 points and even that does not guarantee them a place in the playoffs. KKR also have a poorer NRR than SRH and MI, which does not help their playoff chances.

The R Ashwin-led Punjab franchise has to win both remaining fixtures to achieve 14 points, as well as boost their poor net run-rate. For KXIP to go further, Sunrisers Hyderabad will have to lose its last match and Rajasthan Royals will need to lose to Delhi Capitals. If this happens, no team with 12 or less points can make it to the IPL 2019 playoffs.

Neither team can afford an off day.

Andre Russell has been KKR’s talisman this season, performing powerfully in victories and defeats. With a strike-rate of 249 and 351 of his total 486 runs coming between overs 16 and 20, there is not more dangerous striker of the cricket ball. Punjab have had issues closing out matches, barring a couple superb efforts, and thus need a massive total on the board if they bat first. Russell has proven that few totals are safe as long as he is around, and if KKR bat first then KXIP will need to be exceptional in the slog overs.

(READ: Dream11 prediction – the hot picks for KKIP vs KKR)

Gill-Lynn combo the best for KKR?

After being shunted up and down the order, teenage batting sensation Shubman Gill has found solidity opening the innings. His strike rate of 158 as an opener has been vital for KKR and two of his three fifties this season have come from that spot.

With Chris Lynn, the scores have been inconsistent. In his last 10 innings, the Australian opener has two ducks, a score of 1, three fifties and one 43. On a track expected to aid stroke-making, sticking with Gill and Lynn looks the way for for KKR to go. The Sunil Narine opening role looks to be closed.

A major reason for KKR’s predicament in IPL 2019 is the underwhelming performance of their bowlers. Kuldeep Yadav’s poor season aside, the KKR pace bowlers have been a disappointment. In fact, the 22 wickets that Russell, Prasidh Krishna, Harry Gurney, Lockie Ferguson and Yaara Prithvi Raj have managed is the lowest by any pace-bowling attack this year.

Together, these pacers are also the second-most expensive unit with a combined economy rate of 9.5.

Who has a worse record? Step up KXIP’s fast bowlers, who have conceded 9.6 runs together.

This leaves a lot for R Ashwin, Murugan Ashwin, Mujeeb Ur Rahman, Piyush Chawla and Sunil Narine to do.

With four half-centuries in 11 innings, you could say that Chris Gayle has done well for KXIP given his age and stiffness between the wickets. After scores of 63, 99* and 69 across four matches, Gayle has been limited to 23 and 4 in his last two innings.

In a game KXIP need to win, what odds that the Universe Boss comes up aces? 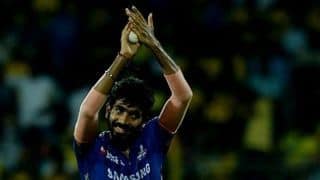 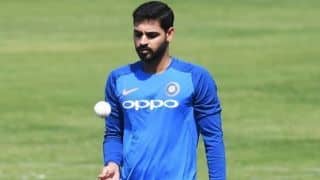