Ishant said it was quite crazy to watch Rishabh Pant take the Mumbai bowlers to the cleaners in the first innings of the match.

He wasn’t thought to be good enough to be a part of the Indian Premier League (IPL) last season, but that didn’t deter India’s Test pace spearhead Ishant Sharma. He went to play county cricket and returned a different bowler. What followed was a quality season in the Test circuit and Delhi Capitals pocketed him at the auction ahead of season 12 to lead the units bowling attack in the IPL. (ALSO READ: Scintillating Rishabh Pant hands Delhi 37-run win over Mumbai)

On Sunday, Ishant once again showed why he is now a more mature bowler. On a Wankhede track where the Delhi Capitals batsmen thrived, Ishant struck early to remove both Mumbai Indians openers — Rohit Sharma and Quinton de Kock — inside the powerplay. While he sent back Rohit in the fourth over, de Kock had to walk back in the sixth.

But Ishant said it was quite crazy to watch Rishabh Pant take the Mumbai bowlers to the cleaners in the first innings of the match and he was quite nervous. (ALSO READ: Opening weekend recap: Pant and Russell sizzle, Bangalore fizzle)

“Actually I was quite nervous. When you see the ball flying everywhere when Pant was batting, it shows how good a batting track it was. I was backing myself, I had a good County season, a good Test season as well and was among the wickets. I was only trying to hold my nerve and control the process, because when you try and control the results, you lose track of the processes,” he explained.

While the team played like a complete unit on Sunday, Ishant said that the biggest positive for this DC unit was the manner in which the team is gelling and the bonhomie among the players. (ALSO READ: I am glad to bat anywhere the team wants me to: Pant)

“Everyone is gelling together well and it doesn’t matter what the result is, which is how the team environment should be,” he said.

While he finished with 2/34 from his quota of four overs, for Ishant it was the winning start that was most important as DC look to set quite a few records straight in the cash-rich league. (ALSO READ: Bumrah has recovered well after hurting shoulder, says MI team management)

“Winning the first game against Mumbai Indians is a big boost for us. We have a new side, a good support staff and it was important to start off well,” he said. 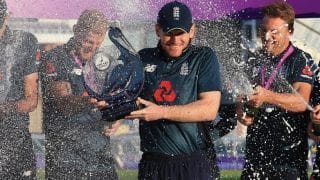