Jos Buttler made a sensational return to form as Rajasthan Royals (RR), despite the middle-order wobble, beat Mumbai Indians (MI) by four wickets in the 27th match of the Indian Premier League (IPL) 2019 at the Wankhede Stadium in Mumbai on Saturday.

Buttler, who had failed to score a half-century after his 69-run innings in RR s first game against Kings XI Punjab (KXIP), tormented the MI bowling attack to end RR s losing streak and denied MI a hat-trick of wins.

Chasing 188, RR enjoyed a brisk start as skipper Ajinkya Rahane and Buttler put up a 60-run stand, with Rahane playing the aggressor s role, scoring 37 off 21 balls before being dismissed by Krunal Pandya.

Buttler then took the matters in his own hands as RR brought up their hundred in the 10th over, with the Englishman notching up a fifty. Not that Buttler was not scoring at a good pace till then but then came the 13th over of the innings and he just took off, scoring 28 runs off an over bowled by Alzarri Joseph. The West Indian pacer was hit for four fours and two sixes as Buttler moved from 61 to 89 in space of six balls. (IPL 2019, MI vs RR: AS IT HAPPENED)

While he could not score his maiden IPL hundred, his 43-ball blitz had put RR in a driver’s seat. However, the visitors had a stutter as they lost three wickets – Sanju Samson, Rahul Tripahi, Liam Livingstone and Steve Smith – in quick succession as MI struck back to make a game out of nowhere.

However, Shreyas Gopal held his nerve and made the most of two dropped catches as RR managed to cross the finish line to register their second win of the season.

Rohit, who was rested from the previous having sustained an injury during the training, made a superb comeback as he and de Kock provided MI a solid start.

While the two were a little watchful at the start of their innings as the first two overs yielded only nine runs, the duo took on the RR bowlers from the third over, with the left-hander getting into the act, with a six and a four and the MI skipper hitting a four to score 18 runs off the over bowled by Krishnappa Gowtham. In the next two overs, the two scored 26 runs as the home team raced past fifty in the fifth over.

However, just when it looked like Rohit and de Kock complete a hundred-run partnership, Jofra Archer dismissed the former for 47 to give RR a much-needed breakthrough. (ALSO READ: IPL 2019, MI vs Rajasthan Royals: Mumbai Indians become first team to play 200 T20s)

Suryakumar Yadav, who replaced Rohit in the middle, looked in a mood to go big, as he moved to 16 off 9 balls, but Dhawal Kulkarni dismissed the right-hander as RR scalped two quick wickets.

De Kock, meanwhile, brought up his eighth IPL half-century in 34 deliveries and continued to lead MI s charge against RR.

Kieron Pollard, whose 31-ball 83-run blitz powered MI to a win against Kings XI Punjab in their previous game, failed to score big and got out for six as Archer struck for the second time. (FULL POINTS TABLE)

While MI had hoped that De Kock would stay till the end but Buttler s stunner dashed those hopes as the left-hander got out in the penultimate over. However, Hardik Pandya s quickfire balls helped MI cross 180-run mark. 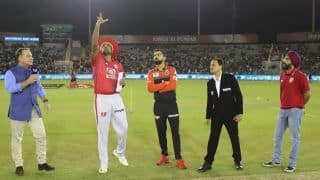