According to Bravo, Chennai do not have team meetings owing to the depth of experience in the squad.

With two wins in a row this season, defending champions Chennai have made a terrific start to the 2019 Indian T20 League which their valuable allrounder Dwayne Bravo believes is testament to the depth in the side.

Written off before the 2018 edition, owing largely to the number of players above 30 in their ranks, Chennai defied the odds to win the pennant for the third time led by MS Dhoni. And now, having beaten Bangalore by eight wickets and Delhi by six wickets, Chennai look the team to beat.

Speaking after the win on Tuesday, Bravo – who claimed three wickets to help keep hosts Delhi to 147/6 – spoke of the enthusiasm and belief in the team and how being led by “the best captain in the world” was inspiring. (READ: Shane Watson, Dwayne Bravo hand Chennai second win)

“We proved last season, you know, age is just a number,” he said. “Whenever people talked about the CSK team, they brought in the age factor. We are not 60 years old, yeah. We are 35, 30, 32. We are still young; we look after ourselves, we look after our body, and we have a lot of experience, and don’t matter what, you can’t beat experience in any sport, in any tournament. In anything you just cannot beat experience.

Then came a statement from Bravo which caught reporters by surprise. Asked about what kind of strategy was adopted when playing with Dhoni, Bravo replied:

Chennai next play Rajasthan on March 31. 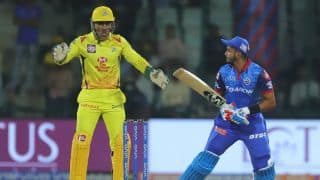