Dhoni's presence at the crease creates pressure for other teams: Raina

Dhoni's presence at the crease creates pressure for other teams: Raina

MS Dhoni missed two games for CSK this season -- against Mumbai Indians and Sunrisers Hyderabad -- and lost both.

The mere presence of MS Dhoni on the pitch creates a lot of pressure for opposition teams and it is always difficult to fill the veteran stumper’s boots whenever he is not around, said Chennai Super Kings‘ batsman Suresh Raina.

Dhoni missed two games for CSK this season — against Mumbai Indians and Sunrisers Hyderabad — due to fever and stiff back, and on both the occasions the defending IPL champions ended on the losing side.

Besides, Dhoni has been in superb form with the bat this year and hit a 22-ball unbeaten 44 against Delhi Capitals to ensure a comfortable 80-run win for CSK.

Asked Raina how challenging it was to lead CSK in Dhoni’s absence, he replied: “I think losing him (Dhoni) as a captain is not an issue, losing him as a batsman is always difficult for us. That’s what happened for us against Hyderabad and Mumbai Indians.

“When he comes to the crease a lot of pressure is created for other teams. When he is not in the team, we see the difference.”

Raina also hinted that he might take up CSK captaincy as and when Dhoni decides to call it quits.

“He has done well in the last couple of years as a batsman as well team mentor. So probably you may see me more next year when he is done but I need more of his calibre. But he will continue as long as he wants to play for Chennai, you know him and Chennai,” he said.

The left-hander also praised Dhoni’s glovework in the light of two brilliant stumpings he had effected on Wednesday night.

“He (Dhoni) had two brilliant stumpings. One is Shreyas (Iyer) and the other is (Chris) Morris. It shows how compact he is.

“In the last couple of years when he was playing for India also, he has done amazing stumpings that shows how involved he is in the game,” Raina said.

“Watto (Shane Watson) and Faf (du Plessis) played very carefully against (Trent) Boult and (Chris) Morris. It is important to have wickets in Chennai because later when you have hitters like MS (Dhoni), (Ambati) Rayudu and Jadeja, you can score extra 30-40 runs.”

Raina, who became the first fielder to take 100 catches in the IPL on Wednesday night, felt it was a blessing for the team to lose the toss as the wicket was a bit difficult in the second innings when Delhi batted.

“I think it was a blessing for us to lose the toss. The wicket was a bit difficult when they (Delhi) were batting second. The game really set up for us. We kept wickets in hands. In Chennai we need to put extra 30-40 runs on the board. that’s what we did.”

“They (Delhi) were very good in the powerplay, but later on they didn’t capitalise on their good start. In Chennai, you need to plan really well against our good spinners. You need to rotate really well, otherwise it is going to be difficult with the heat,” he said.

Meanwhile, Delhi Capitals captain Shreyas Iyer said the defeat was a good reality check for his team ahead of the play-offs.

“After the kind of start we got (52/2 at one stage), we should have at least reached close to the total. It was a reality check for us. We need to assess where we went wrong and come back strongly,” he said.

Iyer said Rishabh Pant could have played ‘smart’ but added he won’t ask the left-hander to curb his style.

“He (Pant) has won matches for us earlier in the season. A batsman like him can turn the momentum with one innings. So I wouldn’t want to curb his style. I like the way he bats,” he said.

Asked about Dhoni’s impact, the Delhi captain said: “We can’t blame our bowlers because you had an experienced campaigner like Dhoni in the middle.

“He can change the game from ball one and if he stays till the end, he can take them to a good total. The bowlers too feel the pressure when MS is in the middle.” 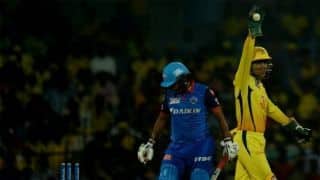 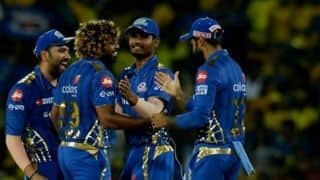 Mumbai Indians vs Sunrisers Hyderabad, IPL 2019, LIVE streaming: Teams, time in IST and where to watch on TV and online in India