Chennai Super Kings (CSK) batsman Sam Billings on Tuesday said collective effort was behind the team’s triumph in the 2018 edition of Indian Premier League (IPL) as different players stepped up at various occasions.

“What stood out for me was that ours was a collective effort,” Billings, who made his debut for CSK last season, was quoted as saying by the club s official website.

“Of course, there were a couple of standout performances like (Ambati) Rayudu’s consistency and (Shane) Watson’s brilliance. Although, actually, if you look at the different games that we won, it was different players at different times stepping up,” he said.

Billings is training with the rest of the squad at the M A Chidambaram stadium in Chennai ahead of the season opener between CSK and Royal Challengers Bangalore on March 23.

The dashing England batsman said continuity helped, adding one grows in confidence knowing that people back you, referring to the CSK’s decision to retain the 23 members from the previous season.

“Continuity helps immensely, certainly as individual players, but also as a group, you grow in confidence knowing that people ultimately back you. It allows you to play with freedom and enjoy it,” he added.

Meanwhile, CSK players sweated it out at training on Tuesday. Dhoni batted at the nets and went for big shots while coach Stephen Fleming kept a watch on proceedings.

Australia allrounder Shane Watson, who shone in the recently concluded Pakistan Super League (PSL) and West Indies veteran Dwayne Bravo, who linked up with the squad on Monday, took part in the training session.

Shikhar Dhawan made it clear he wanted to focus on his batting: Delhi Capitals CEO 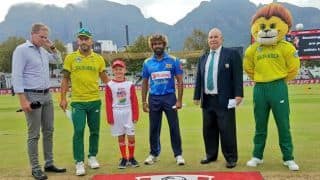