Malinga said Mumbai are hopeful of acquiring the services of the Sri Lanka fast bowler for the entire tournament.

Mumbai coach Mahela Jayawardene explained how the franchise weren’t made aware of Lasith Malinga‘s availability and that the three-time winners of the Indian T20 League are hopeful of acquiring the services of the Sri Lanka fast bowler for the entire tournament. (READ: Malinga prefers World Cup preparation over Indian T20 league)

Sri Lanka s limited-overs captain Malinga, on Friday, opted out of Mumbai s first six matches to qualify for the ICC World Cup 2019 squad. As per a report in ESPNcricinfo, Sri Lanka s selectors have told players they must play in the upcoming Super Provincial One Day domestic tournament if they are to be considered for the World Cup and Malinga has chosen to fulfill that requirement. (READ: Mumbai suffer second blow, Milne pulls out)

“We need to gather our thoughts and see,” Jayawardene told reporters in Mumbai on Sunday. “If you read the entire thing, the tournament is for four or five days in April, so till that time there’s availability. When we got him in the auction, SLC gave us his availability schedule, that tournament wasn’t part of that. So, there is a conversation to be made and once we get through that conversation we’ll let you know. It’s way too early for us to comment on whether he’s going to be unavailable or whatever. We’ll see what happens.”

Malinga s reported absence is not the only fast bowling concern for Mumbai, amid reports of New Zealand pacer Adam Milne also pulling out of the tournament due to injury concerns. Jayawardene, however, confirmed the news and added that Mumbai are waiting on announcing a replacement.

“I think Adam, we were waiting on his fitness, because he had an injury four weeks back. So we needed to wait for his recovery and progress. We had to report two days back that he’s not 100 percent and he might not be able to be part of an extended IPL. So, we’ve realised that we need a replacement. We’re considering that, but we’ve got enough resources so we’ll wait on it.”

As Mumbai open their 2019 Indian T20 league campaign against Delhi at the Wankhede Stadium on Sunday, all eyes will be on Hardik Pandya, who seems to have recovered from the recurring back injury which he first sustained during last year s Asia Cup. With Pandya a sure-shot guarantee for India s World Cup squad, his workload management during the tournament promises to remain a hot topic.

“If you see his Instagram posts for the last month and a half, you see he’s been training. So he’s 200 percent fit. He’s actually too fit to be honest. We worked on his skills, because that is something he hasn’t been able to. He’s in very good space and raring to go,” Jayawardene said.

“With the Indian players, it’s about the individual players – how they feel and all that. And there’s a responsibility on the franchise as well, for the other international players as well who might be involved in the World Cups, to make sure their workloads are managed.

“We’ll do that monitoring, and we’ve been given their workloads as well. The countries want them to be match fit as well. Play good cricket in a good space. You can’t go into the World Cup, without playing much cricket. That balance is something we’ll make sure is maintained. And hopefully, no injuries for any of the players.” 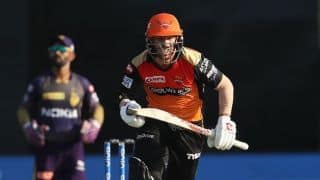