Warner's 37-ball 69 was the reason why SRH could chase down a big target without breaking a sweat.

Chasing 199 was never going to be easy for Sunrisers Hyderabad at the Rajiv Gandhi International Stadium, but a sizzling display from David Warner and Jonny Bairstow at the top of the innings saw them cruise to a victory against Rajasthan Royals with an over to spare. (READ: Warner, Bairstow trump Samson, Rahane)

While it was key to not lose wickets, Warner also ensured that he kept the required run-rate under control. In fact, his 37-ball 69 was the reason why SRH could chase down the total without breaking a sweat.

Speaking after the game, Warner said that he loves how he always has the backing of the fans when he plays in Hyderabad. He also praised Sanju Samson for a brilliant hundred on a difficult wicket.

“One thing that inspires me is the local fans, they are amazing. We try and put on a good show. We didn’t get off to a good start, a serious innings from Sanju and full credit to him. He came out and played really well. He allowed himself time and the wicket got better. Actually I didn’t think it was a 200 wicket. We have played on similar wickets where if you bowl that hard length it is hard to bat,” he said.

Along with Bairstow, he put on 110 in the first 10 overs before Ben Stokes dismissed him and the Australian said that the two are combining really well at the top of the innings.

“Me and Jonny have partnered really well since Kolkata. There have been a few hiccups with him trying to get off the mark, I have been hogging the strike a little bit, but over the years I have been held back a little bit.

“We know this ground pretty well. We know the dimensions well. There has been a breeze from one side for the last two days but tonight it wasn’t there. You have to be calculative with your batting. I enjoy playing in front of this crowd. They are fantastic,” he said.

Warner was pleased as a punch to get his hand on the Orange Cap for becoming the top run-scorer in the tournament so far. “It is orange, Sunrisers, why not,” he smiled. 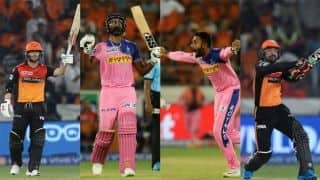