The final four games of the IPL 2019 have been rescheduled to a 730 PM start, the BCCI announced on Monday.

The timings for the final four games of the Indian Premier League 2019 have been rescheduled to a 730 PM start, the BCCI announced on Monday.

The first qualifier, which will be contested between the top two teams after the league stage of the IPL, will be played at the MA Chidambaram in Chennai on May 7. This will be followed by Qualifier 2 and the Eliminator in Visakhapatnam on May 8 and 10 respectively, whereas the final, scheduled for May 12, will be hosted by the Rajiv Gandhi International Stadium in Uppal, Hyderabad

All the four matches have been pushed earlier by half an hour instead of the usual 8PM start. Even last year, the Playoff games were held an hour early, i.e. – 7:00 PM IST.

The BCCI also announced the dates for the Women s T20 Challenge to be held at the Sawai Mansingh Stadium in Jaipur to be held between May 6 and May 11. Three of the four games, including the final, is also scheduled for a 730 PM start while the second game between Trailblazers and Velocity is slated to begin at 330 in the afternoon. 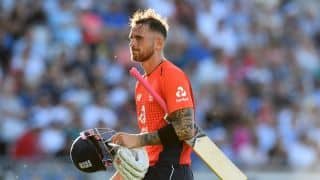