IPL 2019, Qualifier 2: We didn't have as many runs as we expected, says Shreyas Iyer as CSK beat DC to make it to final

IPL 2019, Qualifier 2: We didn't have as many runs as we expected, says Shreyas Iyer as CSK beat DC to mak

The Delhi Capitals skipper though lauded his team's IPL 2019 campaign and said that he learnt a lot from the likes of MS Dhoni, Virat Kohli and Rohit Sharma.

After failing to make it to their maiden Indian Premier League (IPL) final following their six-wicket defeat against Chennai Super Kings (CSK), Delhi Capitals (DC) skipper Shreyas Iyer admitted that the team failed to score to put up a big total on the board.

After put in to bat, DC could only 147 runs as CSK bowlers struck at regular intervals to disallow DC any momentum.

“We didn’t have as many runs as we expected. Had a disappointing start in the Powerplay and we knew that they have good spinners, so it got tough. We thought the wicket would help us as we played a game already over here but none of the batsmen took the responsibility to bat through. There were no partnerships. Good learning for us,” said Iyer.

While DC made their way to the playoffs, the team had their issues playing at home – Feroz Shah Kotla. Iyer admitted that the games on their homeground did not pan out too well for the team.

“It’s something to think about. Home games didn’t go that well for us. We can’t complain though. Have practised a lot for such surfaces but preparing at Delhi on those tracks are risky due to uneven bounce. Can’t blame pitches at the end of the day because we were professional cricketers,” said the DC skipper.

Looking back at DC’s season, Iyer said he learnt a lot from the likes of MS Dhoni, Virat Kohli and Rohit Sharma. The right-handed batsman, who scored 463 runs in this season, lauded his team and thanked the team management and the team owners for the support.

“Looking at the likes of MS Dhoni, Virat Kohli and Rohit Sharma leading their teams and also standing with them at the toss, I have been fortunate to learn things,” said Iyer.

“As captain, I am glad about the support of the owners and the management. There is pressure as you have to be involved in lot of decisions. Totally proud of my team, we did really well to come this far. Been a dream season for us and this is just a start. Time to grow further,” concluded Iyer. 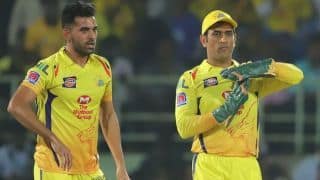