Having made a game out of a small total, Rajasthan Royals skipper Ajinkya Rahane praised his players despite a four-wicket loss to Chennai Super Kings and said that he wouldn’t have done anything differently. (READ: CSK prevail over RR after last-over drama)

Even though Ben Stokes gave away 18 runs off the last over, the captain stood by his bowlers for stretching the game till the last ball. (READ: Dhoni fined for showing dissent)

“I don’t think so (when asked if he’d have done anything differently). Credit to our bowlers, on that wicket I thought 150 was low. We should have batted better, on that wicket – 170 would have been very good. We feel disappointed,” said Rahane.

“It was about having the belief. We knew that if we take wickets in the Powerplay, we’ll be in the game. Fielding will be crucial, we did that pretty well.”

Even though the Royals ended up on the losing side, Rahane reckoned there was plenty of positives to be taken, but also hoped his players would come out all guns blazing in the remaining matches.

“Lots to improve upon in the last 5-6 games. I’m sure the guys will take it on and learn from these mistakes. Sanju (Samson) was back and that was a plus point. Jaydev (Unadkat) was bowling really well. Prayag did really well in his first game. We got to find the balance right, depending on the conditions. I still feel you need to win crunch situations in T20 format,” Rahane pointed out.

Asked about how he was enjoying his own role as captain, Rahane said: “I’m really enjoying my role – lot to learn as well. This is a challenge for me. It’s about taking step by step. As a captain, it’s a different challenge altogether, but I’m enjoying it.” 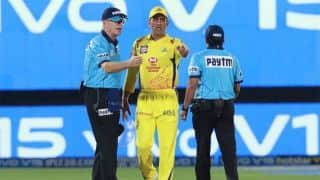