Rajasthan Royals and Chennai Super Kings, at the opposite end of IPL standings, meet in a mismatch of sorts

Rajasthan Royals have lost four of their five matches so far and sit at the seventh spot in the IPL points tally among eight participating teams. Chennai Super Kings have won five of their six matches with one defeat and are at the top of the standings. The two teams will face off in a mismatch of sorts. On current form, this should be a cakewalk for CSK.

But RR would fancy their chances given how close they came to beating CSK in their first meeting last month when they lost by eight runs in a tough chase of 176.

Despite their struggles, RR can hope to match them. For starters, it will be played on their home turf. Playing at home can be a massive advantage as CSK have proven with their unbeaten track thus far at Chepauk. RR can turn their own den into a fortress, provided they take some learnings from their latest opponents.

RR have shown promises in their defeats too but failed to translate them into wins. Their only win has come against fellow laggards Royal Challengers Bangalore. What can they do to stop CSK juggernaut? Bat better.

On bowling friendly tracks, especially those assisting spinners, Chennai have been a step above everyone. Rewind to their clash against Delhi Capitals at Feroz Shah Kotla earlier or just to the Monday night meeting with Kolkata Knight Riders. Their spinners have strangled their opponents. Spin has obviously been their biggest weapon. Their pace department looked a bit shaky which seems to have sorted itself out since the arrival of Scott Kuggeleijn and an in-form Deepak Chahar.

Their batters have shown sensible approach on difficult wickets. Give them one full of runs and expect the likes of Shane Watson, Suresh Raina and MS Dhoni to explode.

To RR credits, they do have a decent attack. Shreyas Gopal has been leading their attack, bamboozling the best but has found little to no support from others. In their last match at home against KKR, RR batsmen struggled indicating a difficult pitch before the visitors threw those observations out of the window with a blazing chase.

Clearly, they are now struggling. Their captain Ajinkya Rahane may have put up a brave face in saying to not panic yet but one more defeat and their campaign might be as good as over.

Weather: Mostly sunny with a high of 39 and low of 26 degrees Celsius

RR desperately need Sanju Samson who hit the first century of IPL 2019. He has missed two matches due to injury. They also need Jos Buttler to return to form who has slowed down after starting with two fifties. They made a couple of changes in their previous match but neither made any impact. Steven Smith has scored runs in his last two innings but has consumed a lot of deliveries. They can shuffle their batting order, giving the likes of Ben Stokes more time to settle in and get some quick runs. Should Ashton Turner be included? If he does, then which overseas star drops out? Smith? Or allrounder Jofra Archer?

Their performance notwithstanding, Chennai will have to ensure their first-choice stars remain fit and available for the crunch matches should the need arise and for the knockouts should they qualify. Rotating a couple of them would seem a wise option. They can rest Imran Tahir for Mitchell Santner who has played just one match this season. Shane Watson has 88 runs in six innings- half of them scored in one innings. Since he isn’t bowling, a good time to try Sam Billings at the top. Ambati Rayudu can also make may for Murali Vijay who can then combine with either Billings or Faf du Plessis to open the innings.

“I think there s no need for us to panic yet. Out of the five matches that we played, we lost badly in just one game. We played well in our last four matches, out of which we could have won three.” Ajinkya Rahane

“I don’t think we want to be playing on these tracks. It becomes too low scoring. It becomes slightly difficult for our batsmen as well.” MS Dhoni on Chepauk pitch 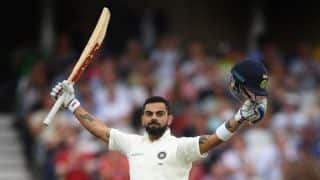