With technology available for every minutest detail of the game, a truly classic Indian T20 League encounter between Bangalore and Mumbai ended on a sour note

With technology available for every minutest detail of the game, a truly classic Indian T20 League encounter between Bangalore and Mumbai ended on a sour note with the on-field umpire Nandan failing to call a no-ball off Lasith Malinga in the last ball of the match with Bangalore needing seven runs to win off the final delivery. A fuming Virat Kohli called the incident ridiculous. (Highlights: Bangalore Vs Mumbai – Match 7)

However, outside of that controversial end if there was even a sliver of doubt whether Jasprit Bumrah is the world’s No. 1 bowler, he dispelled any such thoughts with an exceptional bowling performance in the death overs to steal one for Mumbai in Match 7 of the league at the M Chinnaswamy stadium on Thursday. (ALSO READ: Fuming Virat Kohli calls umpire’s mistake ‘ridiculous’)

Bumrah conceded just eight runs in his last three overs after giving away 12 in his first to keep a marauding AB de Villiers quiet, whose valiant 70* off 41 took Bangalore close to Mumbai’s total of 187/8, but not past it. Malinga had 16 to defend off the final over and he gave away  10 runs, as Mumbai clinched the humdinger by six runs.

Bumrah, who was taken for three fours in his first over by Kohli – the 4th over of Bangalore’s innings – came back for a second spell in the 14th over to remove Kohli and in the 17th, he sent back Shimron Hetmyer and stifled Colin de Grandhomme with four dot balls. In the 19th, he removed de Grandhomme and gave away just five, but, unfortunately, at the end of the match, nobody was talking about Bumrah.

After Mumbai posted a formidable total, despite leg spinner Yuzvendra Chahal’s 4/38, they had Bangalore under the pump early on, but de Villiers first got together with Kohli to set base for the chase, before launching an all out assault in the death overs.

The spinners – Krunal Pandya, who had dismissed de Villiers four times in four matches and Mayank Markande – did trouble de Villiers early on, but the he kept the scoreboard ticking and after negotiating the duo, upped the ante.

Kohli put on 49 runs with the South African before falling in Bumrah’s second spell off a short-pitch delivery which was caught at square leg by Hardik Pandya.

This after Parthiv Patel made 31 off 22 balls – chopping one on to the stumps from Markande. Bangalore had earlier removed Moeen Ali for 13, courtesy a direct hit from Rohit.

De Villiers though motored along and anchored the chase till the end and notched up his 29th Indian T20 League fifty. He then opened up with a four and six off Malinga, playing his first game of the season. However, Bumrah curtailed de Villiers.

Earlier, after winning the toss, Mumbai were off to a good start with Rohit and Quinton de Kock combining for 54 runs in just 6.3 overs. De Kock was the first to go, cleaned up by Chahal – while attempting a reverse sweep – for 23 off 20 balls.

Suryakumar, who was run-out in the first game for just two against Delhi, drove Mumbai in the middle overs, but got out at the wrong time skying one towards cover off a tossed up delivery from Chahal in his third over. The Haryana bowler wrapped up a memorable performance with another tossed up delivery to Kieron Pollard (5) – caught at deep extra cover by  Hetmyer.

Mumbai imploded after that losing Krunal – to another good catch in the deep by Saini – off the bowling of Umesh while Mitchell McClenaghan played one on to hand Siraj his first wicket. Hardik then tonked three sixes in the last two overs push Mumbai’s total. 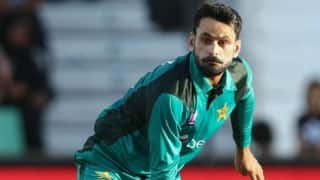