Having suffered two consecutive losses, Delhi Capitals (DC) avoided a hat-trick of defeats with a win over Royal Challengers Bangalore (RCB) at the M Chinnaswamy Stadium in Bengaluru on Sunday. The Virat Kohli-led side, meanwhile, lost sixth game in a row.

Kagiso Rabada was the star performer with the ball, scalping four wickets for 21 runs, and helped DC restrict RCB to 149/8 after electing to field. DC skipper Shreyas Iyer was wholesome in his praise of the South African speedster and his team s bowlers. (IPL 2019, RCB vs DC: Match in Highlights)

I think they (RCB) were 10-15 less on this track. Our bowlers bowled really well. Especially Rabada in his last two overs, said Iyer following his team s four-wicket win against the home team.

Iyer was delighted with his team s performance on Sunday but made it clear that the team will have to think about the areas it needs to work on. (FULL POINTS TABLE)

Obviously, we need to think about the areas we need to work on. It’s a big satisfaction when you win games. You get to see the smiling faces. I am doing alright as a skipper and want to maintain it, said the DC skipper.

While Rabada was the star with the ball, Iyer scored 67 to guide his team to the victory. The right-hander notched up his maiden fifty of the season on a track which was tough to bat on and highlighted how he went about his batting. (ALSO READ: IPL 2019, RCB vs DC: Kagiso Rabada, Shreyas Iyer star as Delhi Capitals beat Royal Challengers Bangalore)

It was tough to bat on. I decided to play positive. I did not want their bowlers to get on top of me. That was my mindset and it worked out well. I was trying to manoeuvre the ball into the gaps, said Iyer.

Rabada, who won the Man of the Match award for his performance, said that the season has been “weird” for his team before discussing how it is important to back oneself. The pacer though said that he does not see himself as a leader but “always there” when someone needs an advice. (ALSO READ: We can’t keep giving excuses every game: Virat Kohli after RCB slump to sixth straight loss)

“It has been a weird tournament for us as a team. It worked for me today and am glad,” he said.

“On a daily basis, you try to execute your simple skills. It is important to back yourself and I do it. I don’t see myself as a leader. If people are looking for some advice, am always there. I have a responsibility at the top of the innings and at the death,” concluded Rabada. 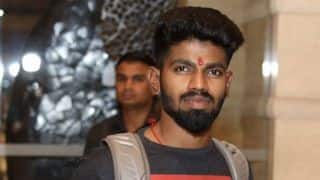